Iran’s Ahmadinejad: We are ready to defend ourselves

This news story was published on September 25, 2012.
Advertise on NIT • Subscribe to NIT 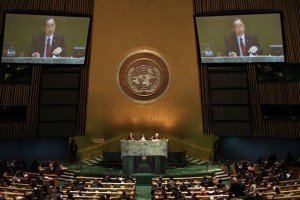 NEW YORK — On what is expected to be his last visit to the United States as president of Iran, Mahmoud Ahmadinejad on Monday offered an expansive view of his nation’s place in history while dismissing Israel’s long-term viability as a state and its threat to strike Iran’s nuclear facilities.

Ahmadinejad ignored an admonition by U.N. Secretary-General Ban Ki-moon to avoid incendiary remarks while he is in New York for the opening of the U.N. General Assembly, lashing out at Israel during a breakfast with journalists at the Warwick Hotel.

Israel, he said, requires an external conflict because “they have found themselves at a dead end and they are seeking new adventures in order to escape this dead end. Iran will not be damaged by foreign bombs.”

Ahmadinejad, who has nine months left in his second and final term as president of the Islamic republic, was referring to Israeli Prime Minister Benjamin Netanyahu’s warnings that Israel would use force to prevent Iran from developing nuclear weapons, something that Tehran denies it is pursuing.

“Fundamentally, we do not take seriously the threats of the Zionists,” he said. “We have all the defensive means at our disposal and we are ready to defend ourselves.”

The United States and its European allies charge that Iran is using what it says is a civilian program as cover to develop the capacity to build nuclear warheads. They have been joined by Russia and China in slapping four rounds of U.N. sanctions on Tehran. They also have imposed their own harsher measures to force Iran to stop enriching uranium and disclose full details of the program concealed from U.N. inspectors for 18 years.

President Barack Obama, while disagreeing with Israeli assessments of how soon Iran could produce a nuclear weapon, says that there is more time for diplomacy. But he has reserved the option of striking Iranian nuclear facilities if negotiations — which have all but stalled — fail.

“Iran has been around for the last seven, 10,000 years. They (Israel) have been occupying those territories for the last 60 to 70 years with the support and force of the Westerners. They have no roots in history,” he said, referring to the founding of modern Israel in 1948.

“We don’t even count them as part of any equation for Iran. During this historical phase, they represent minimal disturbances that come into the picture and are then eliminated,” he said, ignoring the close relations that Israel and Iran maintained until the 1979 Islamic Revolution.

In making his remarks, Ahmadinejad — who is to address the General Assembly on Wednesday — ignored a warning by Ban on Sunday.

“The secretary-general drew attention to the potentially harmful consequences of inflammatory rhetoric, counter-rhetoric and threats from various countries in the Middle East,” said a U.N. statement issued after the two men met on Sunday.

The statement said that Ban also asked Ahmadinejad to “take the measures necessary to build international confidence in the exclusively peaceful nature of its nuclear program.”

Asked to comment on the Iranian leader’s remarks, White House spokesman Jay Carney said, “President Ahmadinejad says foolish, offensive and sometimes unintelligible things with great regularity. What he should focus on is the failure of his government of Iran to abide by its international obligations, to abide by United Nations Security Council resolutions.”

He added: “Thus far, Iran has failed to do that, and so the pressure will continue. And let me be very clear, as the president has been, every option available — and that includes a military option — remains on the table when it comes to keeping the president’s commitment to Iran not acquiring a nuclear weapon.”

Ahmadinejad insisted that Iran’s program is for providing fuel for power plants and radioactive material for medical purposes, all “under the watchful eye of the IAEA,” the U.N. International Atomic Energy Agency.

The IAEA, however, has criticized Iran for repeatedly refusing to answer questions about evidence that it researched a missile-borne nuclear warhead, and the U.N. agency says that it cannot verify that Iran isn’t secretly developing a nuclear weapon.

Despite the increasing bite of sanctions, Ahmadinejad said that Iran is dealing with the measures, noting that just 12 percent of its economy relates to foreign trade.

“The conditions in Iran are not as bad as portrayed by some,” he said.

“The so-called news that you refer to has been denied vehemently, officially,” he said, contradicting a statement last week by the Revolutionary Guard’s commander, Gen. Mohammad Ali Jafari, who confirmed that members of his contingent’s Al Quds Force — a paramilitary and espionage unit — are in Syria.

Assad, whose minority Alawite sect is an offshoot of Shiite Islam, is overwhelmingly Shiite Iran’s main Arab ally. Assad charges that the uprising, estimated to have claimed more than 25,000 lives, is being waged by foreign terrorists armed by Saudi Arabia and Qatar.

Ahmadinejad insisted that Iran is working for “peace in Syria. We like and love both sides.” But, he continued, “intervention and meddling from outside” have made it harder to advance peace efforts.

Ahmadinejad seemed piqued that the U.S. State Department plans to remove an Iranian opposition group, the Mujahedeen-e-Khalq, from its list of terrorist organizations.

The MEK, he said, is responsible for killing 16,000 Iranian civilians, and it will be long seen as a terrorist group in Iran. But he called the U.S. decision a “gift” because it allows Iran to point out “the double standard” of U.S. dealings with the world.