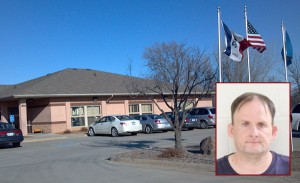 Timothy Patrick Winter was being held at Beje Clark residential facility when he violated his work release.

MASON CITY – Due to a violation of work release rules, mother-beater Timothy Patrick Winter is back in Mason City in the Cerro Gordo County Jail.

As a result of beating his own mother in the head with a hammer in Lake Mills in 2009, Winter received a prison sentence.

Winter, 40, had attempted murder charges dismissed by Judge John Mackey in that case, but plead guilty to willful injury causing serious injury and received a $1000 fine and a 10 year prison term (5 years mandatory minimum), by Judge Colleen Weiland. According to court records, Winter was also sentenced to pay $62616.00 in fine, costs and restitution. He still owes $56997.48 on that.

According to online records, Winter was granted work release to Beje Clark Residential Facility and had violated those terms and is now in the county jail awaiting transport to a new location.

“I’m not sure what they plan to do with him,” a jailer said this afternoon.

The Iowa Department of Corrections said today that “Timothy Patrick Winter #6769295 was admitted to prison on January 27, 2010, and was released to work release on October 11, 2011. He is serving a sentence not to exceed 10 years for Willful Injury from Winnebago County. Iowa Code provides for jail credit and earned time, which reduce the maximum sentence. Offender Winter served a mandatory minimum term of incarceration for use of a weapon (his mandatory minimum date was July 21, 2011). His tentative discharge date is currently November 15, 2013.”

Winter had other assault charges dismissed by Judge Colleen Weiland in 2010 but had to pay court costs. He still owes $75 for that.

Again in 2006, Winter was found guilty of assault on a peace officer and others and given a $50 fine by Judge Daron Fritz.

In 2003, Judge James Drew dismissed child endangerment charges even as he was found guilty of operating while intoxicated. Winter received 150 hours of community service, $1000 fine and 48 hours in jail.

In 2001, Winter had charges brought by the Chickasaw County Sheriff of going armed with a knife with a blade of 5″ to 8″ dismissed.

Winter also has other moving violations, including careless driving, on his record.