According to Clear Lake Police, Elizabeth Michelle Stephani, 36, “struck two women in the face with a closed fist at the Island Bar on July 3rd at 1:20 a.m.”

Stephani was found guilty by a jury on August 27th of the latest assault charges.  She was sentenced to 10 days in jail, a $315 fine and 1 year of probation.  She is now being held in the Cerro Gordo County Jail on $1,000 cash bond and will go before a judge on October 23rd o determine whether her current probation should be revoked.

Stephani plead guilty to driving while barred in 2004 and was given a deferred judgement by Judge Carlynn Grupp and given community service and probation.  However, Gruppp found Stephani guilty of violating a previous probation status and she was given a $500 fine and 7 days in jail.

Stephani was previously found guilty of 3rd degree burglary in 1997 by Judge John Ayers and given a $100 fine.  Judge Bryan McKinley dismissed charges of conspiracy to commit a forcible felony in that case. 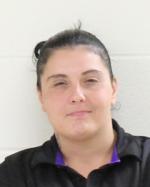