Iowa Gaming Commission: “Growing segment of the community has lost confidence” in Worth County Dev. board 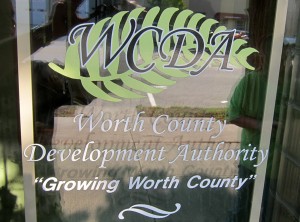 The following letter is from the Iowa Racing & Gaming Commission to the Worth County Development Authority (WCDA) as a result of an investigation into the WCDA spearheaded by Worth County citizens.

For more background on this issue, check these links:

Worth Development Board questioned over use of casino dollars

Worth Supervisors questioned over possible conflicts of interest

This letter is a follow up to the Iowa Racing and Gaming Commission ‘s (IRGC) investigation into complaints made against the Worth County Development Authority (WCDA) as well as a response to the information WCDA recently provided to IRGC. To summarize, in April 2012, IRGC received a complaint regarding the WCDA.

IRGC has consulted with the Division of Criminal Investigation, as well as the Attorney General’s Office. Additionally, IRGC has conducted a number of interviews with officers of the WCDA, spoken with various members of the local communities and obtained and reviewed documentation relevant to the complaint.

Throughout the time IRGC has been reviewing this matter, it has become apparent that a growing segment of the community has lost confidence in the Board’s ability to objectively distribute funds to the citizens of Worth County and surrounding areas. Many members of the community as well as the IRGC remain concerned with the transparency of the Board’s grant process and their subsequent distributions. Understand, IRGC believes it is not our role to determine the percentage of money/grants to be allocated for either education or county projects/infrastructure. In fact, the Board members of the local non-profit license holder are in the best position to know, with appropriate public input, the most effective use and allocation of funds. IRGC recommends the WCDA make whatever changes necessary for improving the grant distribution process to ensure transparency for the general public, as well as IRGC, and incorporate ways to receive more input from the members of the community.

In addition, both the IRGC and the community have been unable to obtain clear answers to questions relating to the WCDA’s process of selecting board members . There is confusion as to how a person who is interested in serving would be allowed to join the board . IRGC agrees that longevity of the members does not always constitute issues or concerns .

However, nearly all of the Board members currently serving have been on the Board since its creation. Additionally, many of the WCDA Board Officers are currently serving on the Worth County Board of Supervisors or are serving in other capacities involving Worth County government. These associations create a perception that the WCDA Board is a subset of the County and not acting as an independent charitable organization serving the interests of the entire community. IRGC recommends the Board evaluate their process in selecting new members and consider ways to incorporate membership to include a more diverse representation of the community.

As part of a licensee’s ability to hold a racing and gaming license, a licensee is required to report “any known irregularities or wrongdoing involving racing or gaming and to cooperate in subsequent investigations”. We remind the Board that any retaliation against any parties that have been involved in this investigation will be acted upon to the fullest extent possible, up to and including, license sanctions against individuals as well as WCDA.

IRGC will continue to monitor the practices of the WCDA. We will look to see if the policies recently adopted by the Board to address IRGC’s concerns prove effective, and if recommendations IRGC made have been implemented.

7 Responses to Iowa Gaming Commission: “Growing segment of the community has lost confidence” in Worth County Dev. board