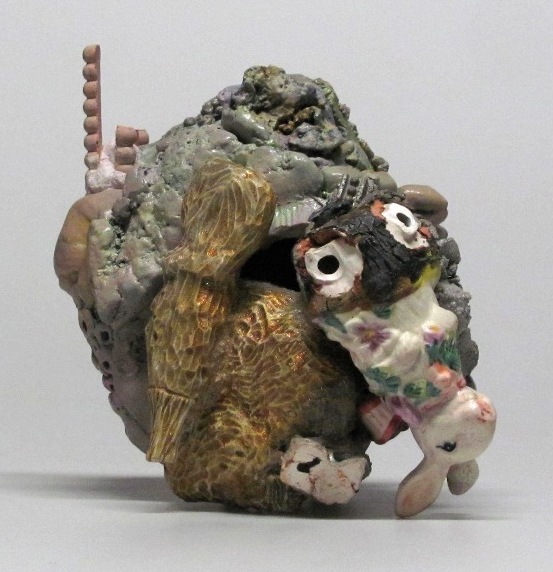 MASON CITY – The following award winners were announced at the opening reception of Iowa Crafts: 41 at the Charles H. MacNider Art Museum on Saturday, December 7, at 2:30 p.m. This statewide competition was open to all artists above high school age residing in the state of Iowa. Forty-four artworks by thirty-two artists were selected for the final show. Iowa Crafts: 41 can be viewed in the Museum’s Kinney-Lindstrom Gallery through March 1, 2014.

Gratia Brown, of Cedar Rapids, was given the Best in Show award for her hand-built assembled ceramic artwork, Triumph of Foam Over Mertar. This award grants Brown a solo exhibition next year in the Museum’s Center Space Gallery.

The Best in Clay award of $150 was given to Aaron Moseley, of Iowa City, for his clay vessel, Blue Raku. Special Mention in Clay of $50 was awarded to Steven Sandberg, of Manchester, for his Stoneware clay piece Orange You Glad I Didn’t Say “Banana”?

The Best in Fiber award of $150 was given to Kimberly Baxter Packwood, of Ames, for her silk wall hanging, Hoodoos No.2. Special Mention in Fiber of $50 was awarded to Susan E. Kuennen Massman, of Elgin, for her basket, Untitled (Deer Antler Basket).

Special Mention in Jewelry of $50 was awarded to Melissa Lovingood, of Mason City, for her Gold Dot Brooch.

The juror for Iowa Crafts: 41 is Zach G. Schnock. Schnock is the Gallery Director and Exhibitions Manager at Wartburg College. In his Juror’s Statement Schnock states, “I had chosen works based on their overall artistic merit and creative direction, as well as craft and aesthetic qualities that I felt worked well for an exhibition. There were some works that had functional and literal aspects, while others had conceptual aspects – all which also influenced my decision making. Works that both pushed the boundaries of craft, and/or maintained the traditional definition of craft were works that I tried to represent as well.”

Iowa Crafts: 41 is being sponsored by NSB Bank. Bank Representative Steve Kruse handed out the award certificates at Saturday’s award ceremony. He also made the announcement that NSB Bank will be sponsoring the Museum’s competitive exhibition in 2014, Area Show: 44.