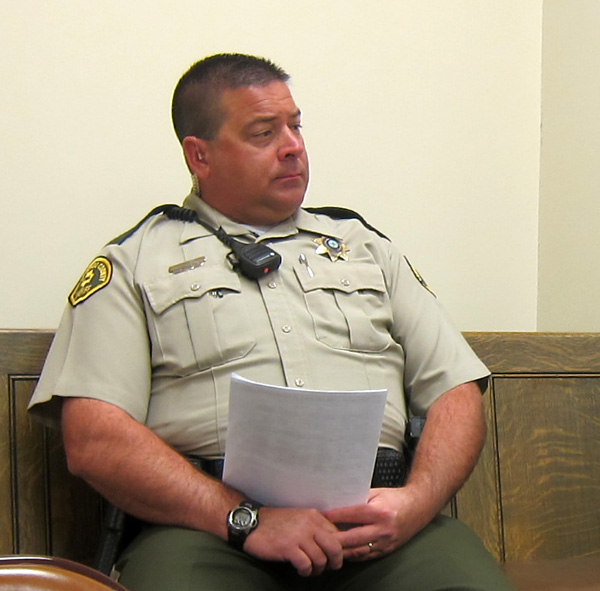 According to a source that phoned NIT’s office today, the deputy was in the room at the request of the Supervisors.  There was no law enforcement nor Sheriff’s business on the agenda.

“In the 4 and half years I have attended meetings, I have only seen that one other time,” Mason City’s Chris Watts stated after the meeting.  Watts is running against incumbent Phil Dougherty for the District 3 Supervisor seat.

Watts was referring to a Supervisor’s meeting a few years back where former Mason City Council member Max Weaver was in attendance.  The Supervisors did not allow Weaver to address the board at that meeting.

Supervisor Bob Amosson made a proclamation prior to calling Tuesday’s meeting to order, saying that “last week things got a little heated.  I am the board chairman and I have a right to conduct this meeting.  We have quite a bit of responsibility here.  I don’t think we’ve ever not give people a chance to speak if they want to know what’s going on.”  (See video)

Amosson was referring to the September 4th Supervisor’s meeting, which was abruptly ended by Supervisors Jay Urdahl and Dougherty as NIT Publisher Matt Marquardt asked a series of probing questions to them regarding the openness of their meetings.

Tuesday’s meeting picked up where that one left off, with Marquardt re-iterating his position that the Supervisor meeting agendas do not clearly indicate that the public is welcome to address the board for a certain amount of time an agenda items, or any issue.

At the conclusion of today’s meeting, Marquardt was allowed to address the board and stated as an example of other public boards, the Mason City Park Board has as their first order of business a public hearing where the public may address the board for up to 5 minutes.  There was a lengthy public discussion Monday night at that meeting, and the board was forthcoming in welcoming it.

“The Parks & Recreation Board welcomes comments from the public during the public hearing(s) and public forum. We ask that you limit the time used to 5 minutes,” the Park Board’s agenda clearly states at the top.

Marquardt had pointed out at the September 4th meeting to Urdahl and Dougherty that at least 3 neighboring counties clearly indicate that the public is welcome to address the board of supervisors and is given a certain amount of time to do so.

Marquardt asked the Supervisor board why they do not clearly indicate to the public on their agendas the option to address the board.

“Because we are the county.  Us three guys can do it anyway we want to,” Supervisor Bob Amosson declared.  (See video.)  “We can run the meetings according to Robert’s Rules of Order.”

Marquardt read an email from Bert Dalmer, Assistant for Whistleblower Protection in the Iowa Citizens’ Aide/Ombudsman Office regarding a previous request for more information to be released by the Supervisors regarding agenda items.

Marquardt re-iterated his request for a packet of background information on agenda items to be released to the public, and shared Dalmer’s advice:

“If you remain intent on getting old agenda packets, or packets in advance of future meetings, I’d suggest you share a copy of this opinion (a 1981 opinion from the Iowa Attorney General that says meeting packets are public record) with the Board, and tell them your request is being made under the Open Records and Open Meetings laws. You may tell them you filed this request at the advice of the State Ombudsman’s office. If they deny you any of these records, you may ask them to cite the specific section of law that allows them to do so.”

Marquardt handed the Cerro Gordo County Supervisors a hard copy of the opinion.