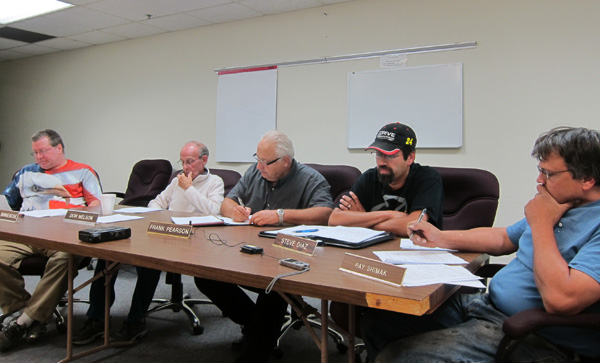 The sledding hill, again, is proposed for the Georgia Hanford Park prairie area in the south east area of the park.

Part of the park is an arboretum, but the sledding hill will be adjacent to that.

Despite this, some folks that live near the park and frequent the trails there voiced concerns over disrupting the area.

“I have a big problem with the lights,” Jean Loes said. She also said that “pushing dirt” in an arboretum was not what she feels should be done.  “We all enjoy it for its natural beauty.  You are changing the view.”

Steve Columbo said he was not in favor of the sledding hill.  “I just think if you have a draw like a sledding hill, you are going to get people there that you really don’t want,” he said.

Marcia Boster questioned the board and how it got to the point of approving the sledding hill, saying that the issue had not been properly advertised in the newspaper.

Some of the other arguments against the hill from the public was not enough snow, winter is too short, too far too walk and not enough parking.

Ozzie Ohl, the volunteer spearheading the project, addressed the board and attempted to clear up any misunderstandings.

After all discussion and input from the public, the board agreed to move ahead with the sledding hill project pending approval from the Gerk family for lights near the hill.  The board agreed that without lights, the project likely could not move forward.

City staff was directed to contact the Gerk family and explain about the lights and ask for their approval.  The Gerk family previously wrote a letter in support of the project.

Even with the Gerk family’s approval of the lights, the project would not get off the ground until at least next year.