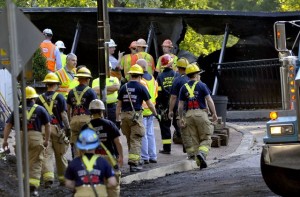 A coal train derailed and tumbled from a bridge in Maryland early Tuesday morning, crushing cars in a nearby parking lot and killing two women who were on the tracks, officials said.

(PHOTO: County crews and CSX officials continue the investigation in the derailment of a CSX coal train in Ellicott City, Maryland, Tuesday, August 21, 2012. Two 19-year-old women died in the accident when 21 cars of an 80-car train derailed or overturned.)

Just after midnight Tuesday, 21 of the train’s 80 cars flipped over on a bridge in Ellicott City, Md., about 12 miles west of Baltimore. Some cars spilled coal across the town’s Main Street, and seven cars fell onto vehicles in a county-owned parking lot nearby, Howard County Police Department spokeswoman Sherry Llewellyn told the Los Angeles Times.

“All you could see was train cars tumbled every which way and coal everywhere,” Benjamin Noppenberger, a chef at restaurant on Main Street, told The Baltimore Sun. “Cars were on the road and parking lot and everything in the lot was crushed.”

As officials cleared the scene Tuesday, using cranes to pry the train cars from the wreckage, they found the bodies of two young women, Llewellyn said.

The victims have been identified as Elizabeth Conway Nass and Rose Mayr, both 19 from Ellicott City. Nass was studying at James Madison University in Virginia and Mayr attended the University of Delaware, police said.

Two train operators were not harmed in the accident, officials said. The cause of the crash is not yet known.

Howard County officials declined to comment further, saying the National Transportation Safety Board had taken charge of the investigation.

NTSB officials arrived Tuesday morning and dispatched a team of rail investigators to examine the circumstances and cause of the crash, including taking measurements and photographing the scene, spokesman Eric Weiss said. The train operators also will be interviewed.

Pictures released by the NTSB show a jumble of wheels, axles and train cars in a heap to the side of the railway tracks.

Investigators looked for a so-called “black box,” a crash-resistant device that records data about train controls and performance. Information from the box could include pictures from a forward-facing camera, or measurements like speed at the time of the crash, Weiss said.

The investigation eventually will result in a report that includes safety recommendations and an analysis of probable cause, Weiss said.

The crash site and wreckage were yards from the oldest surviving railway station in America, the B&O Railway Station.

Now known as the Baltimore & Ohio Railroad Museum: Ellicott City Station, the facility was the original end point of the first 13 miles of commercial railway in the nation.