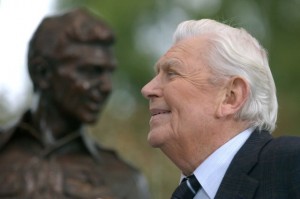 LOS ANGELES — That Andy Griffith was never nominated for an Emmy for either of his signature series — the rural family comedy “The Andy Griffith Show,” in which he played small-town sheriff Andy Taylor, and the legal drama “Matlock,” in which he played an Atlanta attorney — speaks to the subtle and self-effacing manner of his art. And yet we remember him as the rock — tall, broad-shouldered, well-pressed — to which his co-stars clung, and that supported them all.

(PHOTO: Andy Griffith unveiles a statue of himself and Ron Howard as their characters, Andy and Opie Taylor, from Griffith’s television show in 2003 at Pullen Park in Raleigh, North Carolina. Griffith has died. He was 86. )

As an actor, Griffith, who died Tuesday at age 86, was an alert and sensitive partner who gave his co-stars the glory. He was, indeed, a musician who sometimes played and sang on his shows — his bachelor’s degree from the University of North Carolina at Chapel Hill was in music, and he made records throughout his career — and as a sensitive accompanist he did not step on the louder solos of his co-stars, but supported them.

He was as natural and relaxed in his scenes with the young (and preternaturally natural) Ron Howard as with the hectic Don Knotts, helping smooth what easily could have become precious or bumptious and corn pone into comedy that ran with the rhythm of real life.

Country folk, especially Southerners, remain to a surprising degree exotic figures on American television: romanticized or dismissed, simple or crafty objects of fun or suspicion. Howard’s ever-questioning Opie may be the actual youngster here, but most all the people of Mayberry are children in their way: Knotts’ Barney Fife, his head stuck in a dream world more exciting than the one his feet are planted in; Frances Bavier’s lovingly fretful Aunt Bee; and a panoply of citizens and visitors with a tendency toward gossip, superstition and mild misbehavior. (Its closest modern descendant is “Parks and Recreation.”)

As created on a Culver City, Calif., back lot, on streets originally built for “Gone With the Wind,” Mayberry itself was conceived as innocent, a purposeful throwback from the 1960s to the 1930s: “It was when we were doing it of a time gone by,” Griffith told Matt Lauer in a 1996 “Today” interview.

Unlike his fellow citizens, Sheriff Taylor is funny only when he means to be, gently ironic and wittier than you might immediately realize. (That, I suppose, is the definition of a good straight man.) Like them, he is not perfect, though his lapses in judgment never last longer than half an episode and always end with an instructive moment of self-awareness and contrition.

“I just come in second in another contest; the battle of the sexes,” he says at the end of one story, having been put in place by a girl he was not quite dating and yet sizing up for marriage, admitting in the next breath, “Second ain’t so bad.”

The show’s main moral themes could be boiled down to “Don’t be too full of yourself,” “Don’t judge a book by its cover” and, as he says to an apparently stingy Opie, “It just ain’t nice to be selfish.” (It turns out to be a case of Andy being too full of himself.) Your classic Golden Rule stuff.

And there was something childlike about Griffith too, even in his Matlock days, as a deceptively sharp “simple country lawyer,” a big-kid boyishness that did not mask his intelligence or gainsay his authority. He was an artist himself, after all, not identical with the in-the-Army-now bumpkin he played in “No Time for Sergeants” (in its TV play, Broadway and film versions), nor with the one who spoke the comic monologues that first made his career. “What It Was, Was Football,” a hayseed’s description of the game as encountered for the first time, became a national hit record in 1954.

He also recorded, and performed in nightclubs, countrified versions of Shakespeare, at least one of which made it into “The Andy Griffith Show,” as Andy tells Opie the story of “Romeo and Juliet”: “She says, ‘Hon, why don’t you deny your daddy and change your name?’ And he answered her right back, he says, ‘You can change the name of a rose but you cain’t do nothin’ about the smell.’ ”

But if Griffith could never divorce himself from his solidly framed Southernness — a pure product of the poor side of Mount Airy, N.C., he was never going to play a lord or a spy or a costumed superhero — neither was he shackled to repeating variations on heroic affability.

In films and TV movies, or guesting in series from “The Mod Squad” to “Fantasy Island” to “Dawson’s Creek,” he took on a range of characters, some of them quite unpleasant. Yet such is the lasting influence of Sheriff Andy Taylor that it is still a shock to encounter Griffith as the vile and ambitious Lonesome Rhodes, the demagogic, deceptively down-home anti-hero of his first film, Budd Schulberg and Elia Kazan’s 1957 “A Face in the Crowd.”

You remember then that he was actor.