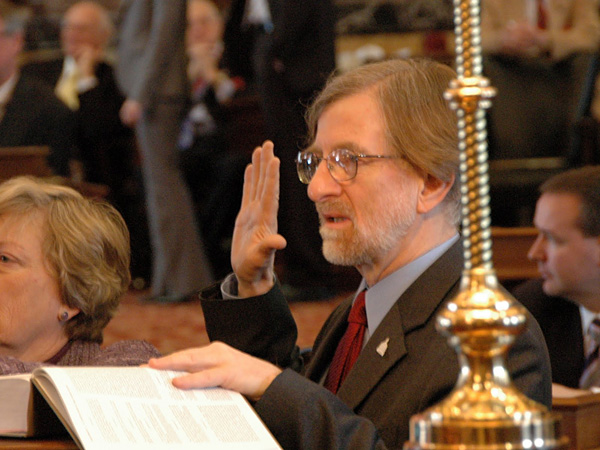 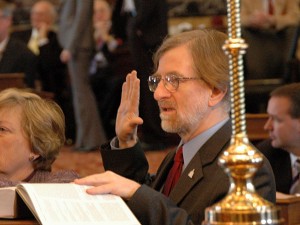 Senator Herman Quirmbach (D-Ames, pictured), chair of the Iowa Senate Education Committee, today issued the following statement on the latest developments regarding Iowa’s application for a waiver of the federal No Child Left Behind law.

“I am disappointed in Governor Branstad’s superficial response to the latest round of feedback from the U.S. Department of Education.  Had the governor taken more time to read the bipartisan legislation that he himself signed, he would have realized that we gave him exactly what the feds asked for in a form nearly identical to the governor’s original request.

“In a recent letter to Iowa Education Director Jason Glass, the US DoE stated that it wanted Iowa to provide new guidelines “or a plan to develop and adopt those guidelines” for a statewide system for evaluating teachers and administrators.  The final version of Senate File 2284, which received unanimous bipartisan support from all ten Republican and Democratic legislators on the conference committee, provided just such a plan.

“The DoE letter lists six specific points it desires for the evaluation system.  All six are either already established in SF 2284 (e.g., annual evaluations) or are included in the bill’s charge to the task force (e.g., using measures of student growth and differentiating at least three performance levels).  Again the language in the final bill directing the task force is virtually identical to what the governor’s original bill draft tells his task force to do.

“The one thing that the governor requested but that SF 2284 did not do was to give Education Director Glass the unilateral power to adopt the educator evaluation system without legislative approval.  Both houses of the Legislature and both parties agreed that that was too much power to vest in an unelected bureaucrat.

“Instead of engaging in election-year finger pointing that misrepresents the truth, Governor Branstad should do two things.  First, he would better serve the interests of Iowa’s students by buckling down and getting to work with the task force that he requested and that the legislature gave him, so that they can meet the October 15 deadline that he and we set.  If they meet that deadline, then we in the Senate look forward to reviewing their recommendations and formulating appropriate legislation to be ready for early consideration in next January’s legislative session.

“Second, Branstad and Education Director Glass need to do a much better job at communicating to the US DoE that we have accomplished exactly what the feds have requested for the NCLB waiver.  So far, they have fumbled the ball.”

For reference, the legislation in question can easily be found online:

The governor’s original bill, SSB 3009, is at
http://coolice.legis.state.ia.us/Cool-ICE/default.asp?Category=billinfo&Service=Billbook&menu=false&hbill=SSB3009.
The final bill, SF 2284, is at
http://coolice.legis.state.ia.us/Cool-ICE/default.asp?Category=billinfo&Service=Billbook&menu=false&hbill=sf2284.
The governor’s “Statewide Educator Evaluation System Task Force” is on page 8 of SSB 3009.
The Legislature’s identically titled task force is on page 5 of SF 2284.
On the use of student achievement data for teacher evaluations, see Section 10, p.5, lines 19-33 of SSB 3009 and the virtually identical Section 9, paragraph 5, pp.5-6 of SF 2284.
On the requirement to rank educators’ performance levels, both bills propose a four-tiered evaluation system, using the exact same sentence on page 8 of SSB 3009 (lines 18-20) and on page 6 (paragraph number 6) of SF 2284.
The U.S. Department of Education letter is at
https://governor.iowa.gov/wp-content/uploads/2012/06/Letter-to-Iowa-re-ESEA-flexibility.pdf.