Get ready for the next big movie franchise: ‘Hunger Games’ 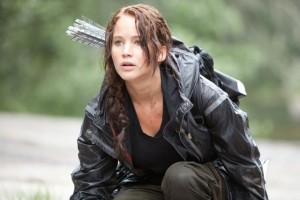 LOS ANGELES — The movie magic is over for “Harry Potter.” The bite will be gone from “Twilight” when the final film’s released in November.

It now falls to “The Hunger Games,” based on to the best-selling trilogy by Suzanne Collins, to launch the next great film franchise.

It’s a worthy heir. This story is not only a big literary success — where parents and their children are reading the books — it has spawned numerous websites and merchandise.

The books — “The Hunger Games,” “Catching Fire” and “Mockingjay” — are huge. The first novel has been on the New York Times best-seller list for more than 180 consecutive weeks since publication.

Even “Twilight” writer Stephenie Myer blogged that the story kept her up for several nights in a row because she couldn’t stop thinking about it even after she finished the books.

On midnight Thursday, the first film in the series will make its assault on the box office. Advance ticket sales through the online site Fandango show that three out of every four movie tickets purchased are for the film. More than 1,000 showtimes have already sold out across the country. Although marketed as a book for young adults, Fandango’s reporting 46 percent of advance tickets are being purchased by those 25 or older.

—What is “The Hunger Games”?

In the trilogy, Collins tells the story of Katniss Everdeen, one of 24 teens selected to compete in the televised Hunger Games in a future where the United States has been divided into 12 regions all under the tyrannical rule of The Capitol.

Cameras capture every life-and-death moment as the players battle until only one is left alive. The games were established as a way for the government to remind citizens who is in charge.

Before the young gladiators begin their battles, they are trained in survival skills, fighting and how to win over sponsors who can provide needed supplies. Part of the strategy is to have Katniss and her district games partner, Peeta, pretend they are romantically involved as a way to sway sympathies.

The message of the trilogy is unlike the “Twilight” series, where a young teen dates a vampire, or “Harry Potter,” where magic wins the day. “The Hunger Games” is anchored to an existence that can already be seen today in the unending flood of reality TV shows. It’s a cautionary story of what happens when people start to lose touch with their humanity.

Lenny Kravitz, who plays Cinna in the film, says what makes the books and movie so interesting is that while they are set in the future, so many of the issues are current: reality television, violence, the 99 percent versus the 1 percent.

After reading the script, co-star Donald Sutherland, who plays President Snow, thought this could be one of the “most important films ever.”

“This script could make a film that actually motivates, energizes a generation of young people who have been — from my point of view — by in large, dormant. It can make them stand up and take political action. It could help them to recognize with this allegory the nature of the society they live in and the need for change,” Sutherland says.

Time magazine saw the same power in the books and named Collins one of the “100 Most Influential People” of 2010.

The books are considered young adult fiction, aimed at readers ages 13 and up, but have been embraced by people of all ages. More than 26 million copies of the trilogy — in 40 countries — have been sold. Collins became only the sixth author to sell more than one million Kindle e-books units.

—How violent is the story?

The violent nature of the story has been a concern since the first part of the trilogy published in September 2008. Critics were concerned the story of children forced to fight to the death for the entertainment of others was too brutal for young readers.

Jennifer Lawrence, the 21-year-old actress who plays Katniss in the movie, says the violence is exactly why young people should read the books and see the movie.

Prolific writer Stephen King acknowledged the violence in his positive book review of “The Hunger Games” in Entertainment Weekly. “Let’s see the makers of the movie version try to get a PG-13 on this baby.”

Lionsgate has done what King never thought could happen: “The Hunger Games” opens with a PG-13 rating.

Executive producer Nina Jacobson had members of the Motion Pictures Ratings Board read the book so that they would have an idea of what the production crew needed to be mindful of while filming. When the initial cut of the movie was screened for the panel, only minor changes had to be made to give the film a PG-13 rating.

Jacobson credits director Gary Ross with having the right instincts to keep the integrity of the books while creating a movie that can be seen by a broader audience than if it had been rated R.

“Gary’s instinct were that the power of these scenes would be in having them feel real, not like a movie but like you are there,” Jacobson says. “We stay with her point of view and she does not see everything.”

Hollywood insiders are projecting Ross’s instincts will be strong enough to make “The Hunger Games” the biggest box office hit so far this year.

“It’s our fastest-selling franchise-opener since ‘Twilight,’” says Rick Butler, general manager and executive vice president of Fandango. “The brisk advance ticket sales are a testament to the strength of the incredible marketing campaign which has clearly resonated with fans and even those unfamiliar with the books.”

The studio isn’t waiting for the opening weekend box office totals to see if those predictions are right. Work has already started on the script for “Catching Fire.”