‘Dr. Seuss’ The Lorax’ targeted for its green credentials 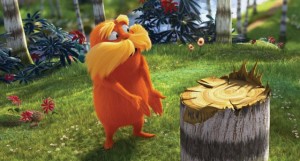 LOS ANGELES — “I am the Lorax. I speak for the trees.”

So declares the environmentally minded title character in Dr. Seuss’ children’s book “The Lorax” — and in Universal Pictures’ big-screen adaptation, opening Friday. It may not seem like a controversial message, but the studio and filmmakers are finding themselves squeezed between two groups of critics: those who complain the animated movie aims to “indoctrinate children and turn them into millions of little eco-warriors,” and those who question whether the marketing and promotional tie-ins, including one for an SUV, are sufficiently eco-friendly.

“Dr. Seuss’ The Lorax” chronicles a furry orange creature’s attempts to stop an enterprising man named the Once-ler from cutting down Truffula trees — the key resource for his new invention, a soft and multipurpose thing called a Thneed. The film is helmed by “Despicable Me” director Chris Renaud and written by Ken Daurio and Cinco Paul, who also penned the film adaptation of Dr. Seuss’ “Horton Hears a Who!”

“For me personally, it’s about encouraging people to take actions that can in some way help the world around them,” said producer Chris Meledandri. He and the writers highlighted a dual message: to take care of the planet and take action to enact change. As central in the film as it was in the book is the Seuss-penned couplet, “Unless someone like you cares a whole awful lot, nothing is going to get better. It’s not.”

Nearly 70 promotional partners are involved with the film, including the Environmental Protection Agency and the U.S. Forest Service as well as companies such as Hewlett-Packard (which is encouraging eco-conscious printing choices), and Seventh Generation (which claims to be the leading brand of green household products).

“We targeted partners that had an environmental message or a healthy message or some sort of message about making better choices,” said Stephanie Sperber, president of Universal partnerships and licensing.

But some of Universal’s partnership choices, including one with Mazda, have come in for scrutiny.

The car company is boasting that its CX-5 compact crossover SUV “has earned the Certified Truffula Tree Seal of Approval.” According to a Mazda news release, the vehicle has “a fuel efficiency and engine output improvement of 15 percent compared to existing models.” A 30-second spot depicts an animated version of the SUV driving through a valley of Truffula trees.

Satirist Stephen Colbert mocked the campaign on “The Colbert Report” on Monday night, ending the segment with his own Seussian ode, saying Thneeds are “as comfy and thick as the thick ironies of the Lorax and Seuss hocking big SUVs.”

Meanwhile, a commentary on the website of the liberal political magazine Mother Jones said: “Sure, it’s apparently better than other SUVs on the market. But not that good.” Multiple bloggers expressed surprise that Universal did not select an electric car for the partnership.

The film’s ability to rattle the opinionated, though, is of little surprise to the producers and writers, given the book’s history.

Controversy has trailed “The Lorax” since it was published in 1971 — it has been banned over the years in some schools and libraries, especially in regions with economies dependent on timber. The book so irked the National Wood Flooring Manufacturers’ Assn. that in 1995 the group published its own Seuss-like book, “Truax,” praising the logging industry. On the book’s 40th anniversary last year, a critique published in Nature magazine called the Lorax character a “parody of a misanthropic ecologist.”

Months before Universal announced its marketing partnerships on the movie, the studio was receiving pleas to stress the book’s environmental message more strongly. The first trailer for “The Lorax,” released in October, emphasized the adventurous sentiment of the story and the comedy supplied by the small but formidable Lorax.

Ted Wells, a fourth-grade teacher at Park School in Brookline, Mass., who reads “The Lorax” to his class every year, said he and his students were surprised to find the environmental message was absent from the trailer and film’s website. They crafted a petition on Change.org, outlining ways Universal could stay truer to Seuss’ lessons.

A second trailer, released in December, revealed more of the story line and included title cards like “Change the Future” and a voice-over of the book’s memorable couplet. The website now has “Go Green!” tips from the Lorax.

But a Media Research Center article about the petition warned against “using children to promote an agenda.” The head of the conservative content analysis organization, Dan Gainor, also takes issue with the film itself. “They’re trying to equate caring about nature with environmental extremism,” he told the Los Angeles Times. What “The Lorax” is “teaching our kids is that the biggest threat to Mother Earth is mankind, and it’s a ludicrous premise.”

“I don’t want the moron writers of ‘The Lorax’ trying to indoctrinate children and turn them into millions of little eco-warriors. Who appointed them in that role?” added Gainor, who last December also criticized “The Muppets” as anti-capitalist because the villain of the movie is an oilman named Tex Richman.