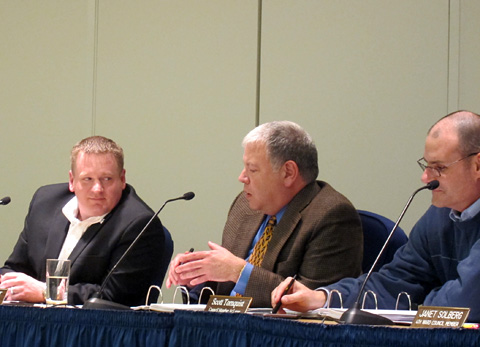 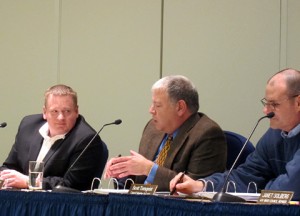 MASON CITY – At Tuesday’s meeting, the City Council once again unanimously approved every item on the agenda with a 6-0 vote.

Several agenda items were pulled and there was some brief discussion on those items, but no council members took any real action other than to agree with each other and ask a few questions.

On agenda item 11, pertaining to the hiring of Perry Buffington as Human Resources Manager, City Administrator Brent Trout said he negotiated a higher rate of pay in order to get Buffington into the job.  Hiring him “was my goal in the beginning,” he said.  Trout added that Buffington was the lean coordinator at IMI Cornelious and will help with that initiative at City Hall.  Council member Scott Tornquist liked the hire and said he knew Buffington from “Boy Scouts.”

On agenda item 13, pertaining to an annual program for contracting services from private companies to paint streets and parking lots, Council member Alex Kuhn asked City Engineer Mark Rahm if the work could be done by city employees.  “No,” Rahm said.  “We would need a special truck.”  The work, which used to be done by city employees using a paint sprayer and stencils as late as the 1990’s, would have an estimated cost of over $108,ooo.  As a cost example, it will cost the city $67.oo to paint one rail road crossing set; the city needs 72 of them done, for a cost of $4824.00.

On agenda item 16, pertaining to the possible hiring of three new firefighters, there was concern expressed about the overtime costs at the Mason City Fire Department.  The City will be applying for grant funds to cover the cost of the new personnel.  Hiring the new firefighters would alleviate “overtime over the next two years and an increase in staffing would provide better service and response to the citizens,” Trout said in a City Hall memo.  The council will continue to research shift changes that would lower the amount of overtime paid to fire department employees.  Currently, firefighters work 24-hour shifts.

On agenda item 19, pertaining to an expansion at Cargill Kitchen Solutions, a company representative was in attendance and accepted many thanks from the council on adding 20 jobs to their payroll.  The jobs pay an average of $13.65 per hour.  Cargill is receiving tax abatements (TIF) for 10 years in return for adding the jobs.  Kuhn asked if there was flexibility in the deal, for example if Cargill came up a job short, the city would not necessarily have to find them in default.  Trout said it would be up to the council to make that determination if that circumstance arose.