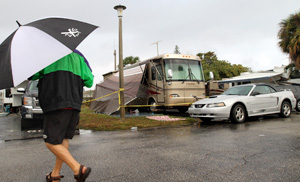 DEERFIELD BEACH, Fla. — A Port Orange man’s trip took a bizarre turn when he drove his family to a recreational vehicle in Deerfield Beach, killed someone unknown to him there and then stabbed himself, his wife and two sons, the Broward Sheriff’s Office said Friday.

(PHOTO: A man looks back at the recreational vehicle, Friday, February 10, 2012, where on Thursday night, a man took his family members and others hostage in a standoff that resulted in three dead, and two critically injured at Highland Woods RV Park in Deerfield Beach, Florida.)

The incident led to an hours-long standoff with SWAT team members, and it ended with three people found dead: The alleged attacker, Willam De Jesus, 41, his 9-year-old son, Jeshiah De Jesus, and one of the RV’s occupants, Ovila Plante, 76, a snowbird from La Tuque, Quebec, the Sheriff’s Office said.

During part of the ordeal, Plante’s girlfriend also was held captive inside her RV at Highland Woods, a community of recreational vehicles. Pierrette Beauchemin managed to escape, run to safety, and was unhurt.

“This was initially just a bizarre and senseless crime,” sheriff’s spokeswoman Dani Moschella said of how the standoff unfolded. “And over the course of the evening, it became more horrific.”

About 6:20 p.m. Thursday, De Jesus drove his red Mustang into the RV park, accompanied by his wife and sons.

De Jesus approached the RV at Lot 61, occupied by Plante and Beauchemin, even though De Jesus and his family didn’t know the couple, officials said. “We do know that they were strangers to them,” Moschella said.

According to the Sheriff’s Office:

De Jesus started yelling at Plante, and Plante pushed him away. De Jesus pulled out a revolver and shot Plante in the chest. Plante fell to the pavement outside his home, and De Jesus approached him and shot him again in the head.

De Jesus led his family into the RV, still occupied by Beauchemin.

Later, Beauchemin fled from the vehicle and ran to deputies outside. De Jesus spoke to law enforcement by telephone early during an hours-long standoff, but later stopped talking to them.

About 12:30 a.m., the SWAT team entered the RV and found De Jesus and Jeshiah dead. De Jesus’ wife and other son were found seriously wounded.

“There was a sense of elation when everyone realized there might be survivors inside: SWAT team members rescued the woman and the 7- year-old,” Moschella said.

According to the Sheriff’s Office, detectives determined that De Jesus stabbed his sons with a knife from the RV’s kitchen before stabbing his wife and himself.

A motive hasn’t been identified, and it was unknown where the Port Orange family had been before showing up at the Deerfield Beach trailer park.

“It’s just so tragic and horrific when you think about the loss of life for seemingly no reason,” Moschella said. “These two little boys must have been so frightened. It must have been a nightmare for them.”