CTS Coupe is a Cadillac for the Camaro set 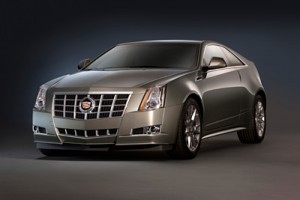 So you’re pining for a Camaro but are over age 30? Or perhaps you like the idea of a powerful coupe but desire one with the kind of sophistication that suits your lifestyle — and happens to be made in America as opposed to Germany or Japan. Let me direct your attention to the Cadillac CTS Coupe, a wedge of a car that strikes the senses in an upper-crust kind of way, much as that aforementioned muscle car hits the more base ones.

Yes, the CTS is a Cadillac, but one whose traits I liken more with the youthful Camaro than some massive, plain sedan a grandfather would drive. And that isn’t a bad thing from either a business or mechanical perspective.

The CTS Coupe made its debut as a 2011 model and is available with rear- or all-wheel-drive. Though it wears the CTS name, it hardly looks like its sedan or wagon relatives. This highly sculpted coupe is the best-looking Cadillac in years. It’s a Cadillac that doesn’t remind me of a Cadillac — in other words, it looks nothing like a DTS land yacht cruising around Leisure World.

The CTS Coupe also marks Cadillac’s venture into the highly competitive entry-level luxury coupe market, which includes cars like the BMW 3-Series, Mercedes-Benz C-Class, Audi A5 and Infiniti G37, all admirable vehicles in their own right.

Under the hood, the manufacturer-lent 2012 Cadillac CTS Coupe that I recently test-drove for a week featured a 3.6-liter V-6 engine, similar to the one that powered the last Chevy Camaro I drove. In this application from GM’s luxury division, the engine makes 318 horsepower. And like the Camaro, the CTS can also be had with a V-8 engine, just in case 300-plus horsepower isn’t enough for you. In the case of the CTS, that optional engine adds a “V” to the car’s moniker, and makes a tire-vaporizing 556 horsepower.

The car is meant to evoke a muscular arrow. Even traditional, pull-out door handles are exempt. Instead, to enter the vehicle you place your fingers on a touch-sensitive pad that pops open the long doors, which felt awkward my first few days with the car.

This is indeed a youthful Cadillac, if you can believe such a thing, one dripping with both luxury and style.

Inside, the car features the kind of amenities you’d expect in a Caddy: wood and leather surfaces, a Bose surround-sound audio system, heated and ventilated seats, and a navigation display that magically rises forth from the dash. My optioned-up test car was further laden with a wonderful-feeling suede steering wheel and, get this, Recaro seats, like the ones you might find in a serious sports car.

On the road, the car was both powerful and comfortable. Its suspension was tight but didn’t break my back. It made a fine cruiser, its engine always willing to help this thing slice through traffic.

Fuel-efficient, though, mine was not, and here’s where the CTS also shares some other traits with the Camaro, albeit negative ones. While the car is EPA-rated at an admirable 18 mpg city/27 highway, don’t get your hopes up. Over a week of driving, I only averaged a little above 19 mpg.

Then there are those blind spots. Oh, those terrible blind spots. The CTS Coupe is an amazing wedge of auto-designer heaven, but the compromise comes in the form of two swaths without rear visibility, just like with the Camaro. Thank God for the blind-spot monitoring system.

Also like the pony car are the rear seats, which I just refer to as “purgatory.” There are two rear seats in the CTS Coupe, but — and this is assuming you can finagle yourself back there — they are mighty cramped. And like in the Camaro, anyone beyond about 5-foot-5 will likely be scraping their skull back there. It just isn’t pleasant.

One last similarity to the Camaro: The trunk is rather small and requires an awkward reach just to get larger items in there.

Still want one of these? I can’t really blame you. Like the Camaro, the CTS Coupe is a car with compromises. But it’s also a car for the impassioned, and a worthy entry by Cadillac to attract younger buyers.