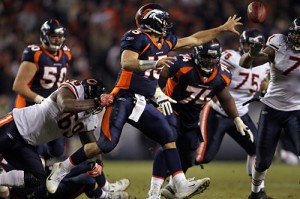 Are you ready for some Tebowing? America can’t get enough.

Another huge audience is expected when the Florida native leads the Broncos in the second round of the NFL playoffs against the New England Patriots on Saturday night.

Last week’s overtime thriller against the Pittsburgh Steelers was the most-watched television show since last year’s Super Bowl, with an average audience of 42.4 million. Tebow’s winning 80-yard touchdown pass prompted Twitter chatter of 9,420 tweets per second, a record for a sporting event.

“I think the biggest thing is really so many non-football fans, or people who normally don’t follow the game, they’re all in tune with Tim Tebow,” Jimmy Johnson, former Dolphins coach turned TV commentator, said this week.

A poll by ESPN last month showed Tebow to be the nation’s most popular athlete, well ahead of Kobe Bryant and fellow quarterbacks Aaron Rodgers, Peyton Manning and Tom Brady. It took Tiger Woods three years to attain that status, while Tebow is in his second pro season.

He may also be the most polarizing figure in sports, due to his outspoken Christian beliefs and unorthodox style as a quarterback.

Tebow’s appeal comes from a blend of skill, enthusiasm and outspoken faith, says the Rev. Leslie Northup, an associate professor of religion and culture at Florida International University.

“With some people, the power of their personality makes their accomplishments more compelling, and that annoys some,” says Northup, an associate professor of religion and culture at Florida.

Tebow talk transcends normal football discussion. In a nationwide poll this week by Poll Position, 43 percent of respondents said they believe Tebow’s success is due in part to divine intervention.

“People are watching the Tebow show because he’s a second-rate quarterback, and he’s winning games, often against great odds while playing his best at the most opportune times,” said Carter Turner, a professor of philosophy and religion at Radford (Va.) University.

“For a large segment of the population, Tebow’s success is proof that God intervenes in our lives,” Turner said. “Doesn’t God reward faith? Lord knows Tebow has faith.”

Hoping to counteract any mystical Tebow mojo, a group of witches in Salem, Mass., held a circle on Friday (the 13th) for the benefit of Brady and the Patriots.

Even some Jews have jumped on the bandwagon: Someone on Craigslist is selling T-shirts marked with a Star of David and “Jews for Tebow.” There’s even a “Jews For Tebow” Facebook page.

“Whether God helps Tebow throw extra yards, I don’t know. But it’s always good to thank God for being able to play a good game. God can recognize somebody who is close to him,” said Rabbi Yoseph Biston, supervisor of North Broward and South Palm Beach counties for Chabad Lubavitch.

Religion and football are inevitably linked with Tebow. His autobiography, “Through My Eyes,” was the best-selling religious book released in 2011.

Weekly sales surged progressively late in the year as Tebow led a series of improbable comeback victories, according to publisher HarperOne, from about 2,000 when he became the starter in October to a peak of 25,000 in late December.

Likewise, sales of Tebow’s No. 15 jersey has jumped from No. 10 among NFL players to No. 2 behind the Packers’ Rodgers.

Forgive Fox Sports President Ed Goren for a tinge of network envy. Fox is showing what may be the two best playoff games this weekend (Giants-Packers and Saints-49ers), but Goren is well aware that the event of the season will be the Tebow-Brady showdown of quarterback contrasts on CBS.

Consider that the TV ratings for the other three playoff games last weekend were off from 7 to 22 percent from comparable coverage last season. The Broncos-Steelers game, with a 24.0 rating and 40 share, drew the highest rating for a NFL wild-card game since the Dolphins and Chiefs in 1994.

The total audience was the largest ever for a wild-card game, according to NFL spokesman Greg Aiello.

Asked what percentage of viewers tuned in mainly because of Tebow, Goren said: “Oh, boy, a lot. A lot. It’s really been a phenomenon.”

The irony is that Tebow was one of college football’s all-time greats at the University of Florida but expected to flop as a pro by many so-called experts. Now he is the NFL’s hottest commodity.

Tebow has given the league a much-needed feel-good story to rebuild interest following last year’s labor dispute similar to what baseball got following the strike of 1994-95 from Cal Ripken’s pursuit of Lou Gehrig’s consecutive games record.

Cheryl Guzman confesses she had little interest in football before Tebow became a public figure. Now, she’s interested in how he handles the attention.

“Now I want to see what he’ll do next,” says Guzman, administrator of the media department at Calvary Chapel of Fort Lauderdale. “He has an incredible platform to show what a Christian looks like. I want to see how he reacts to it.”

She acknowledges that the attention is “double-sided” because some people have criticized Tebow for his public statements about Jesus — and gestures like his famous “Tebowing” gesture, where he bows down on one knee with his forehead on his fist. It spawned an Internet photo craze on Tebowing.com.

Tebow style is confounding to some, his often awkward throws like fingernails on a chalkboard to the vision of the classic pocket passer. Even basketball’s Charles Barkley has become an outspoken critic, referring to the Tebow phenomenon as a “national nightmare.”

Yet, there was Tebow standing in the pocket and hitting Demaryius Thomas in stride for an 80-yard touchdown pass on the first play of overtime to beat the Steelers.

Being unpredictable makes him all the more watchable. Root for Tebow or against him, the urge to tune in to see what will happen next is hard to resist.

The previous meeting between Tebow and Brady, won by the Patriots in December, generated the biggest audience of the regular season. CBS expects a ratings bonanza for Saturday’s rematch because, “Nobody has an idea what to expect,” Sean McManus, president and chairman of CBS Sports, said in an interview with Jim Rome.

All that is certain is the network and the NFL will be the biggest winners. Some believe a higher authority will be smiling as well.