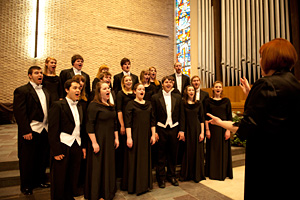 MASON CITY, Iowa — Join the Charles H. MacNider Art Museum for the performance of the Simpson College Madrigal Singers Saturday, January 14, at 2:00 p.m. Madrigals are secular vocal music pieces of the Renaissance and early Baroque eras.  This style originated in Italy during the 1520’s and works were often love songs.

The Simpson College Madrigal Singers have a long and proud tradition of performing Renaissance secular literature in all languages. They also perform sacred literature and contemporary works designed for small ensemble. This group of 18 to 20 performers tour widely and have been heard on such prestigious stages as Carnegie Recital Hall in New York City and Tyrone Guthrie Theatre in Minneapolis. Founded by Dr. Robert L. Larsen, the ensemble has earned plaudits from critics throughout the United States and Europe. They tour annually and perform regularly in Europe during May term, including trips to Italy, France, Germany, Austria, Great Britain, Scandinavia, Russia, Spain, Scotland and England.

The Simpson College Department of Music trains professional musicians. It has received full accreditation from the National Association of Schools of Music since 1947, and confers the Bachelor of Music degree in Performance and Music Education and the Bachelor of Arts in Music.    Music at Simpson is widely recognized as offering a premier education for vocal, piano, and instrumental students. Simpson develops the unique gifts of each student through a combination of one-to-one music instruction, classroom teaching, and countless performance opportunities. They offer programs which prepare students for performing careers, train music teachers, and lay the groundwork for graduate studies in performance, conducting, stage direction, musicology, music education, and arts administration. Aspects of the program have been cited as outstanding by U.S. News and World Report and the program in voice as exceptional by the National Association of Teachers of Singing.

The performance is at 2 p.m. in the Salsbury Room of the Charles H. MacNider Museum.  The show is open to the public and no reservations are required – however seating is limited to a first come first serve basis. Admission to the performance is free.