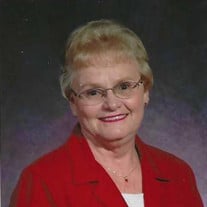 Judith Ann (Schwartz) Borchardt went home to be with the Lord on August 4, 2022.

Visitation will be held 10:30am to 11:00am prior to the service at Ward-Van Slyke Colonial Chapel.

Judith was born on May 18, 1938, in Mason City, Iowa. She was the ninth child born to Theodore and Margaret Schwartz. She attended elementary school in Plymouth, Iowa. In 1952 her father retired from farming and they moved to Mason City, where Judith attended school, graduating in 1956 from Mason City High School.

On September 1, 1957, Judith was united in marriage to Russel J. Borchardt in the First Baptist Church, Mason City, Iowa. They lived in Kansas City, MO. where she worked for Hallmark Cards while Russel attended college. In March 1959 they moved to Des Moines, Iowa where they resided until retiring in June 2001 to Clear Lake, Iowa. Judith was a full time mother and housewife and also did Dressmaking & Tailoring until 1975 when she then started doing bookkeeping and office management for several different companies in Des Moines. After moving to Clear Lake, Judith worked part-time for The Clear Lake Arts Center.

Judith accepted Christ as her Savior at an early age and was then baptized at First Baptist Church on June 10, 1951. She was a member of Westover Baptist Church, Des Moines, Iowa from July 1959 – October 2003; she then joined the Clear Lake United Methodist Church and continues to be active in the church and in facilitating Bible Studies. She also was active in Clear Lake Christian Women’s Connection.

Judith enjoyed traveling with her husband and enjoyed several trips to Europe, the Virgin Islands, Hawaii, Alaska and to China, as well as traveling within the United States. Many fishing trips were made over the years to Minnesota and Wisconsin. Grandchildren were a special joy to her. She enjoyed taking them, their friends and cousins fishing, boating, water skiing and tubing on Clear Lake and especially teaching the grand girls to sew.

In lieu of flowers the family requests memorial gifts be made to a charity of your choice.