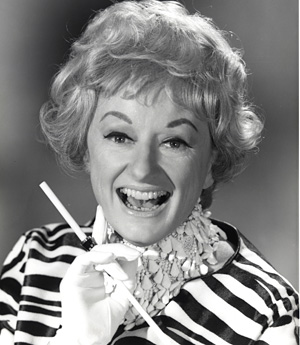 LOS ANGELES — She was a self-described “cartoon,” a zany housewife-turned-comedian with an electrified hairdo who broke into the male-dominated world of standup comedy in the 1950s with an outlandish wardrobe and a barrage of self-deprecating jokes punctuated by her trademark guffaw.

“I spent seven hours today at the beauty parlor; hell, that was just for the estimate,” Phyllis Diller would say on stage, firing off one joke after another. “I’m in the 14th year of a 10-day beauty plan.”

(PHOTO: Phyllis Diller was one of the first female comics to hit it big anywhere. Phyllis Diller has died at her home in Los Angeles, California, August 20, 2012. She was 95.)

Diller, whose stand-up career spanned nearly 50 years, died in her sleep Monday at her longtime home in Los Angeles’ Brentwood section, said her agent, Fred Wostbrock. She was 95.

Diller followed, after a fashion, in the footsteps of women such as Grand Ole Opry staple Minnie Pearl and Jean Carroll, who joked about domestic life in an understated manner on “The Ed Sullivan Show.” But Diller’s flamboyant style, signature laugh and sharp barbs about her husband and home life set her apart, captivating the staid audiences of the Eisenhower era and inspiring a new generation of funny ladies.

Her high-profile success at being able to go “toe-to-toe with her male counterparts in prime clubs,” as comedy critic and historian Gerald Nachman once put it, helped pave the way for Joan Rivers, Ellen DeGeneres and others.

“She was there, she was doing it, she was filling rooms, and that’s what made her such a great role model for someone like me starting out,” Rivers told the Los Angeles Times on Monday. “Phyllis came out and she talked and she was funny and she got off — and that was a big revelation in those days.

“Looking back now, it suddenly hit me: She was the last of the women comedians who had to make themselves ugly to be laughed at. It was a requirement. A woman walked on stage in those days and was pretty, she was a singer. Phyllis still had to put on the funny boots and stupid hats, and she was the last to do that.”

As a professional comedian, Diller was a late bloomer: The Ohio native was an Alameda, Calif., mother of five when she made her nightclub debut at the Purple Onion in San Francisco in 1955 — at age 37.

Known for her adept timing and precisely structured jokes, Diller took pride in being able to deliver as many as 12 punch lines per minute.

The first laugh came easy. With her fright-wig hair and garish attire that typically included a fake-jeweled cigarette holder, gloves and ankle boots, she merely had to walk on stage.

Jack Paar once described her as looking “like someone you avoid at the supermarket.” Bob Hope called her “a Warhol mobile of spare parts picked up along a freeway.”

But Diller was always the first to address her colorfully eccentric stage persona, describing herself as “The Elizabeth Taylor of ‘The Twilight Zone’ ” and a woman who once worked “as a lampshade in a whorehouse.”

During her long career, she was in more than two dozen movies, including three with Hope, with whom she also appeared on numerous TV specials and traveled with to Vietnam to entertain U.S. troops.

She also was the host of a 1964 TV talent show called “Show Street” and starred in the 1966-67 situation comedy “The Pruitts of Southampton” (renamed “The Phyllis Diller Show” midway through the season) and the 1968 comedy-variety series “The Beautiful Phyllis Diller Show.”

She also had a stint starring in “Hello, Dolly!” during its original 1964-1970 run on Broadway. But the outlandish Diller always shined best in nightclubs, showrooms and concert halls, where one of her favorite targets was her domestic life, including her fictional husband “Fang.”

“Fang’s idea of a seven-course dinner is a six-pack and a bologna sandwich. The last time I said let’s eat out, we ate in the garage.”

“I put on a peekaboo blouse. He took a peek and booed.”

Then she’d launch one of her patented guffaws: “Ah-HAA-haa-haa!”

Born Phyllis Driver in Lima, Ohio, on July 17, 1917, Diller made people laugh at an early age.

“When I realized I looked like Olive Oyl and wanted to look like Jean Harlow, I knew something had to be done,” she once said. “From 12 on, the only way to handle the terror of social situations was comedy — break the ice, make everybody laugh. I did it to make people feel more relaxed, including myself.”

After high school, she studied music and voice at a conservatory in Chicago, then met 24-year-old Sherwood Diller at Bluffton College in Ohio.

They eloped in 1939, she dropped out of school and they settled into married life in Bluffton.

During World War II, they moved to Ypsilanti, Mich., where Sherwood worked at a B-24 bomber plant. In 1945, he transferred to the Naval Air Station in Alameda, across the bay from San Francisco.

Over the next 10 years, Sherwood Diller held a string of jobs while Phyllis raised their five children. But with job changes and frequent unemployment, times were tough.

To help support her family, Phyllis worked as the women’s editor at a small newspaper, an advertising copy writer for an Oakland department store and later an Oakland radio station. From there, she became director of promotion and marketing at KSFO, San Francisco’s top radio station.

All the while, Diller had amused friends at parties with her jokes about household drudgery. She was so good that her husband began pushing her to become a professional comic.

“It took two years of nagging by my husband to get me onto that stage,” she told Nachman.

In a 1982 Los Angeles Times interview, she recalled finally “throwing caution to the wind.”

“I sat down, called the Red Cross and said, ‘I have an act. Where do you want it?’ They sent me to the veterans hospital at the Presidio, where I pushed a piano into a room that had four guys in it. I played, sang, told jokes while they yelled, ‘Leave us alone; we’re already in pain!’ ”

But spurred on by her husband, Diller forged ahead.

After auditioning at the Purple Onion, she opened at the small San Francisco club on March 7, 1955.

When she first started, Diller told United Press International in 1984, “I looked like the woman next door. I mean, I was just anybody, and on stage that just doesn’t work. My opening night I wore a cotton dress. I had brown hair — pullleassse.”

She then broke into her infectious, trademark laugh.

“So, little by little, I learned,” she said. “Making myself a blonde was the first step. I started dressing more theatrically, and then I realized I couldn’t make body jokes if they could see my actual figure because I had a good figure. That got me to those little dresses, and then later I designed my funny boots and gloves. I had to wear gloves because all clowns wear gloves.”

The famous hairdo, she said, was an accident.

“I had gotten into so much trouble bleaching my hair myself that I had to go to a scalp clinic, and they gave me this comb and said brush the top of your head for circulation. My hair was standing straight up after that, but I was so busy I’d forgotten to put it back down when I’d go out on interviews for jobs. But it worked.”

After her record 89-week run at the Purple Onion, Diller honed her act on the road.

“It’s all about structure,” she said of her comedy success in a 1998 interview with the Chicago Sun-Times. “If there’s one thing I can do, it’s write a joke. Too many comics today ramble. By the time they get to the punch line, the audience has either gone to sleep, gone to the bathroom or gone to bed.”

She rose swiftly up the show business ladder, appearing as a contestant on Groucho Marx’s TV quiz show “You Bet Your Life” in 1958, the same year she made the first of numerous appearances on “The Tonight Show” with Jack Paar.

By 1962, she was performing at Carnegie Hall.

She later incorporated her musical training into her act. Billed as Dame Illya Dillya, she performed as a piano soloist with about 100 symphony orchestras around the country in the 1970s and early ‘80s.

Diller, who suffered a near-fatal heart attack in 1999, retired from doing her comedy concert act in 2002 after 47 years as a stand-up comedian. But she continued to act occasionally and do voice-over work, as well as paint.

Her marriage to Sherwood Diller ended in divorce, as did a second marriage to actor Warde Donovan. Diller, who never remarried, was the companion of attorney Robert Hastings from the mid-1980s until his death in 1996.

Diller is survived by her son, Perry; her daughters, Sally Diller and Suzanne Mills; four grandchildren; and one great-granddaughter.