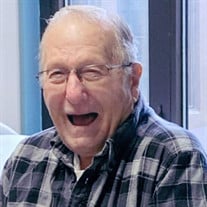 Gene Paul Halfman passed away August 6, 2022 at MercyOne North Iowa Hospice at the age of 95.

A Mass of Christian Burial will be held at 10:30am on Wednesday, August 10, 2022 at the Sacred Heart Catholic Church, 410 N Broadway St, Manly, IA, with Father Neil Maternach as Celebrant. Burial will follow in the Manly Cemetery.

Gene was born on July 9, 1927 on a farm located southeast of Osage, Iowa (Mitchell County) to Joseph and Lila (May) Halfman. The Halfman family moved from Osage to a farm north of Manly in 1932 when Gene was five years old. Joe and Lila adopted two girls, Mary Lou and Carol, when Gene was in his early 20’s. Gene also worked for the American Crystal Sugar Company in Mason City a short time in the 1970’s. In 1992 Gene and Loretta purchased a home in Manly and Steve and his wife, Deanna took over the family farm.

Gene was united in Marriage to Loretta Bentten on April 8, 1959 at the Sacred Heart Church Rectory in Manly. They have two children, Linda and Steven.

He attended a rural grade school north of Manly, the Sacred Heart School and the Manly School. Gene farmed the land he grew up on and enjoyed the farm life to the fullest. After retiring, he would continue to help Steve in the spring and fall during planting and harvesting. He even did most of the combining in the fall of 2020 at the age of 93, and at the age of 94 he helped with chisel plowing in the fall. Farm work stayed in his blood, he loved to watch the crops grow. He would frequently drive around the 4-mile square of the farm to look at the progress of the crops and check on what Steve was doing.

Gene served many years on the Manly Farmers Elevator Board, and the Manly Creamery Board. In Gene’s younger days, he enjoyed bowling, golfing, playing cards, and playing games of pool with Linda. Gene and Loretta played in a couple of 500 card clubs for many years while on the farm. He enjoyed playing weekly games of dominoes and going to coffee with many friends at HyVee in Mason City. In the last few years, he really looked forward to coffee with friends in Osage and Manly each week.

Gene was a charter member of the Manly Lions Club which started in 1977. He was also a member of the Sacred Heart Church in Manly.