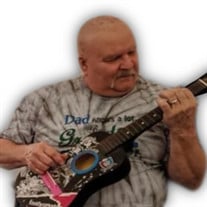 Family will have a Celebration of Life at a later date.

Jeff was born on August 29, 1956 the son of Wilbert and Betty (Hogshead) Tiedt of the Tripoli and Fredericksburg, IA area. He attended school in Fredericksburg and later furthered his education at NIACC studying in HVAC. Jeff was a jack of all trades, there weren’t many skills he didn’t know how to accomplish. If there was something he didn’t know how to do he would take the time to learn how to do it, and make sure it was done correctly.

He spent a majority of his life with the love of his life, Amelia Wheeler; they were together for nine years before they married on August 9, 2005. The family that they brought together was his whole world, he loved them all unconditionally. He especially loved his granddaughter, Danika. The family is going to miss his contagious laugh, his talents for cooking, and his leadership on every adventure they took. Jeff was also known for his musical skills, playing the drums, guitar and singing, which he began at the age of twelve. Although he wasn’t trying to be a Jerry Garcia impersonator he seemed to be one of the best.

Jeff is preceded in death by both of his parents; step-mom, Charlotte; mother in-law, Marilea Wheeler; and two brothers, Don and Jerry.

To quote Jeff and how he lived his life, “Rock On”.