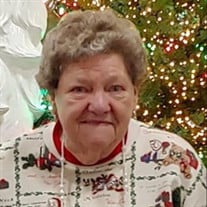 Elva was born November 6, 1941, in Mason City, daughter of Norman and Margaret (Harrington) Olsen. She was a life-long resident of Mason City and Plymouth. She was a part of the last graduating class of Plymouth High School in 1959. In 1961, she was married and had four children with Arden Magnuson. Over her lifetime she worked as an aide at Good Shepherd and IOOF Homes, a homecare CNA, bartender, and a cook at the Cerro Gordo County Jail where she was known for her great cooking.

Elva was a member of Trinity Lutheran Church as well as the Women of the Moose. She enjoyed playing cards, especially cribbage, 500 and 31. She was also in many bowling leagues and traveled to different states for tournaments. She always loved telling stories and jokes. She had many friends and enjoyed talking about the grandkids and great-grandkids. She was an avid collector of Mickey Mouse items. On her 80th birthday, she celebrated with many cards from family and friends. Elva also loved telling her friends and family how much she had won at the casino; although she’d never say how much she spent.

Elva was preceded in death by her parents, Norman and Margaret; brother, Michael; and sisters, Norma Jean, Judy, and Ann.