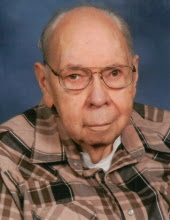 Dale Lamprecht, 86, of Charles City, passed away Sunday, May 22, 2022 at the 11th Street Chautauqua Guest Home in Charles City.

A memorial service for Dale will be held at 11:00 a.m. on Friday, May 27, 2022 at St. John Evangelical Lutheran Church in Charles City with Pastor Russ Leeper and Pastor Anita Nuetzman officiating. Lunch will be served following the service.

A gathering of family and friends will be held from 10:00 a.m. until the start of the service on Friday at the church.

Born January 28th, 1936, in Elma, IA, he was the son of William Lamprecht and Edna (Unger) Lamprecht. He grew up on the family farm near Elma raising dairy cattle and grain crops. In 1960 he entered the Army Reserves and finished his military contributions in the Iowa National Guard. He married Pauline Westendorf in 1960 and raised two sons. In addition to farming, he was employed at Lenz Implement in Riceville, IA as a mechanic and as a semi-driver.

He left the farm in 1976 and moved to Charles City and later divorced. Because of his love for animals, he found a career working for Solvay Animal Pharmaceuticals as an Animal Research Technician. In 1978, he married Rose (Tietz/Ryan). Dale was a member of Toastmasters and retired from Solvay in 2001. Together, Dale and Rose sold Watkins Products. He enjoyed meeting people during fairs and shows and was an avid antique collector and could often be found attending auctions. Dale was a member of the Charles City Community Senior Center and served on the board, including the role as president.

Dale was preceded in death by his parents and sister, Wilma (Lamprecht) Knutson.

Dale’s early upbringing; grounded his strong faith, his love of animals, the joy of gardening, his easy-going demeanor, and his love for everyone.