CEDAR FALLS – The UNI women’s basketball team returned home for a thrilling rivalry game against the Drake Bulldogs. In a contest that stayed close through the final minutes, the Panthers weren’t able to grab the finish, losing to Drake 73-68.

A slow start was a problem for the Panthers again for the third game in a row as they made only four points in the first five minutes of the game. Despite a career blocking effort from forward Bre Gunnels and a career-tying game in assists for guard Kayba Laube, UNI couldn’t pull off the finish on Saturday afternoon.

“We’re up eight at the half and they go on a 15 and 0 run or something to start the second half, that’s inexcusable,” said Head Coach Tanya Warren following the loss. “I thought we had some really bad mental errors with the game on the line. They [Drake] won every 50/50 ball with the game on the line. You’ve got to give them credit, for whatever reason we can’t beat them. But it’s a hard pill to swallow.”

The Panthers grabbed the first point of the game as center Grace Boffeli drew a foul on her first shot. Boffeli grabbed one point at the line in the first two minutes. But the Bulldogs would respond with an eight-point run over two and a half minutes to force a timeout from UNI. Out of the timeout guard, Emerson Green would nail a corner three to get the Panther offense going. Guard Kayba Laube would also hit a trey almost two minutes later to get UNI within one. Drake would respond with a layup to get back up by three but another three-pointer from center Cynthia Wolf would tie the game up for the Panthers. UNI would close out the quarter on an eight-point run to be up 15-10 going into the second.

Momentum kept going for the Panthers into the second as Green made the first layup of the quarter 18 seconds in. It’d be back and forth baskets until UNI grew their lead out to 11 with a six-point run in less than a minute. Drake answered back with a nine-point run a minute later to get back within two. It’d be another response from the Panthers with a six-point run to stretch the lead back up to eight. UNI would take an eight-point lead into halftime off two free throws from guard Maya McDermott.

But it would be a sow second-half start for the Panthers despite Gunnels making a layup 40 seconds in. The Bulldogs would go on a 15-point scoring run led by forward Anna Miller. The double-digit run for Drake would last almost five minutes until Laube made a three-pointer with four minutes to go. The teams would trade a layup each as the Bulldogs headed to the free-throw line. Guard Karli Rucker would get it back within one for the Panthers on a three-point shot with a guard right in front. The Bulldogs would match with a trey of their own but the Panthers would score seven points in the final two minutes to make it a one-point game going to the fourth quarter.

Despite closing the gap to end the fourth, the offense would be a struggle for the Panthers in the first couple minutes of the final quarter. Drake would have the first two baskets until Boffeli made a layup at the 8:16 mark. Boffeli’s layup would set off an 11-point run for UNI, highlighted by a Laube three from the corner to regain the lead. The Panthers largest lead of the quarter would be five minutes in as Boffeli made two free throws to have UNI up by 5. But Drake would continue to answer the Panther runs, tying the game back up twice in the sixth and seventh minute of the game. The Bulldogs would grab the last lead of a three-point play in the final two minutes from Miller. A trey from guard Megan Meyer would be the dagger for UNI as they fell to Drake 68-73.

Shooting the Panthers were 25-60 (41.6%) from the floor, 8-17 (47.1%) from behind the arc, and 10-12 (83.3%) from the line. Almost half of UNI’s points came from the paint while the Panthers found some success capitalizing off of Drake turnovers with 23 points made. UNI barely lost the rebounding game with 34 boards to the Bulldogs 37 and led in blocks with eight made.

Rucker and Gunnels were the only Panther players in double-digits with 19 and 13 scored respectively. Laube would be close behind with nine points. Boffeli led UNI in rebounds with 10 boards while Gunnels added 6. Gunnels also had a career-high game in blocks, making 6 against the Bulldogs. Her former career record was 5 blocks against Drake earlier this year and St. Louis in the 2021 WNIT tournament.

UP NEXT:
The Panthers get to stay home for the second week in a row as they welcome both Bradley and MVC-leading Illinois State to the McLeod Center. First up for UNI will be the Braves on Feb. 25 with tipoff set for 6 p.m. 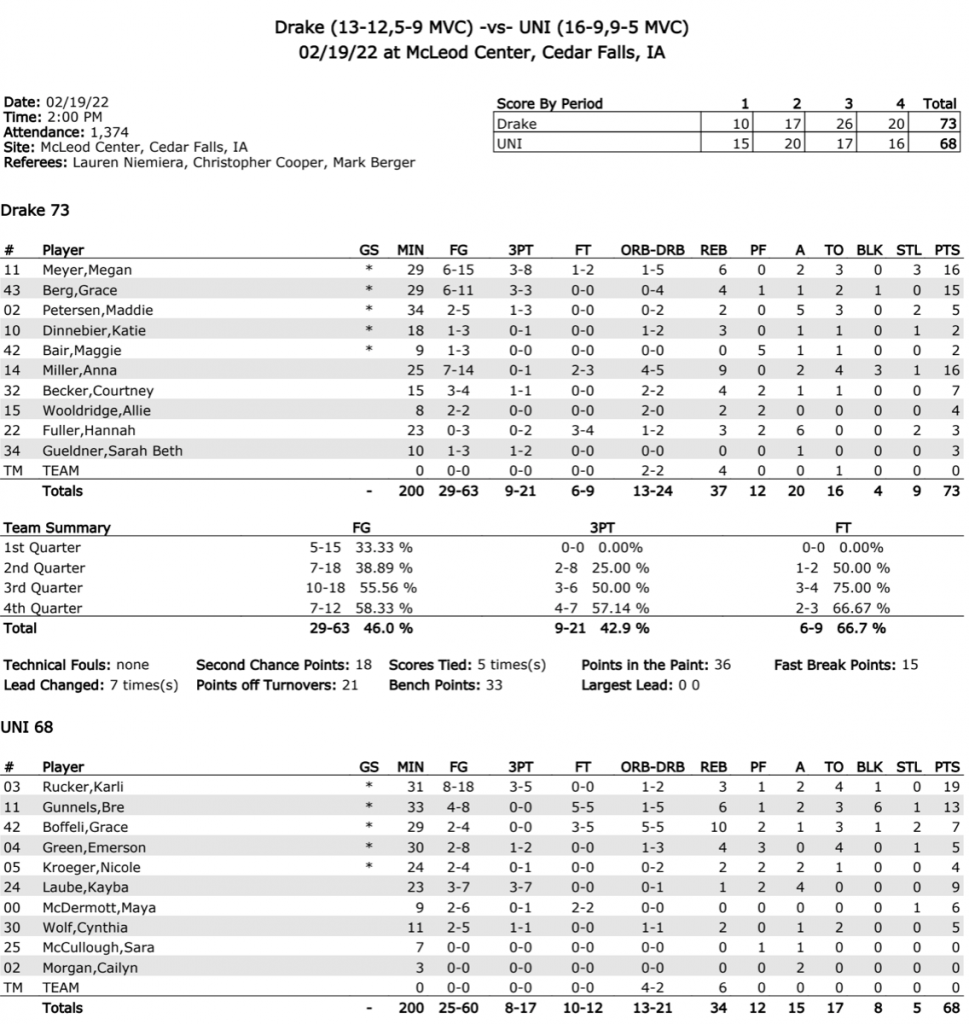