VALPARAISO, Indiana – After 19 days away from the court, the UNI women’s basketball team wasn’t able to get their first win of the conference season, falling to the Valparaiso Beacons 58-60.

A cold final frame and second-half rebounding struggles were too much for the Panthers to overcome in their first MVC game of the year against Valparaiso. Despite the struggles, freshman center Grace Boffeli had the first double-double of her collegiate career with 13 points and 12 rebounds.

The Panthers showed it’d be a three-point shooting kind of first half off the first basket as freshman guard Maya McDermott made a trey in the first 30 seconds of the game. UNI would add another three-pointer shortly after from senior guard Nicole Kroeger, who then went back to back off a Valpo turnover just a minute later. The Beacons would get their best run of the quarter with two minutes to go, scoring 5 points in under a minute. But the Panthers would get the last basket as freshman guard Kayba Laube made a last-second trey from the corner.

McDermott would again get the first points of the quarter for UNI, making another three-point basket in the second minute. It would then be a back and forth quarter between the two teams. The best scoring run of the second quarter was for the Panthers as they scored 5 points in the final two minutes of the half. But Beacon guard Ilysse Pitts would get the last shot of the half, making a final second layup to bring the halftime score to 33-30 UNI.

The second half of the game would start with an early officials review as the Panthers would begin the half with the ball. Boffeli would get the first basket of the half with a second-chance layup. The shot would start a 7-point run for UNI over the next minute. But it’d then be a quiet three minutes as the only points made between the teams were chances at the line. The Panthers would get one more scoring run in the quarter, making four baskets in just over 2 minutes. Kroeger would end the third with a driving layup in the paint to give UNI a 9-point lead heading into the last quarter.

Senior guard Bre Gunnels had a four-point play to start the fourth for the Panthers. Gunnels would make a 3-point jumpshot from the corner and get the and 1 at the charity stripe. The play would give UNI their largest lead of the game at 13 points just 30 seconds into the final frame. But Valpo would find their offense as they went on both a 6-point and an 8-point run in under 8 minutes. The 15-2 run for the Beacons in the 4th quarter would lead them to the win as senior guard Karli Rucker’s final second 3-point shot would bounce off the rim.

Individually, Boffeli led the way for the Panthers with her double-double. Also, in double digits for UNI were McDermott with 12 and Kroeger with 10. Boffeli also led the Panthers charge defensively with 12 rebounds, 2 steals, and 2 blocks.

UP NEXT:
UNI continues their weekend road trip with an afternoon contest against the Loyola Ramblers. The game is set for a 1 p.m. tipoff from Gentile Arena and will be broadcast on ESPN3. 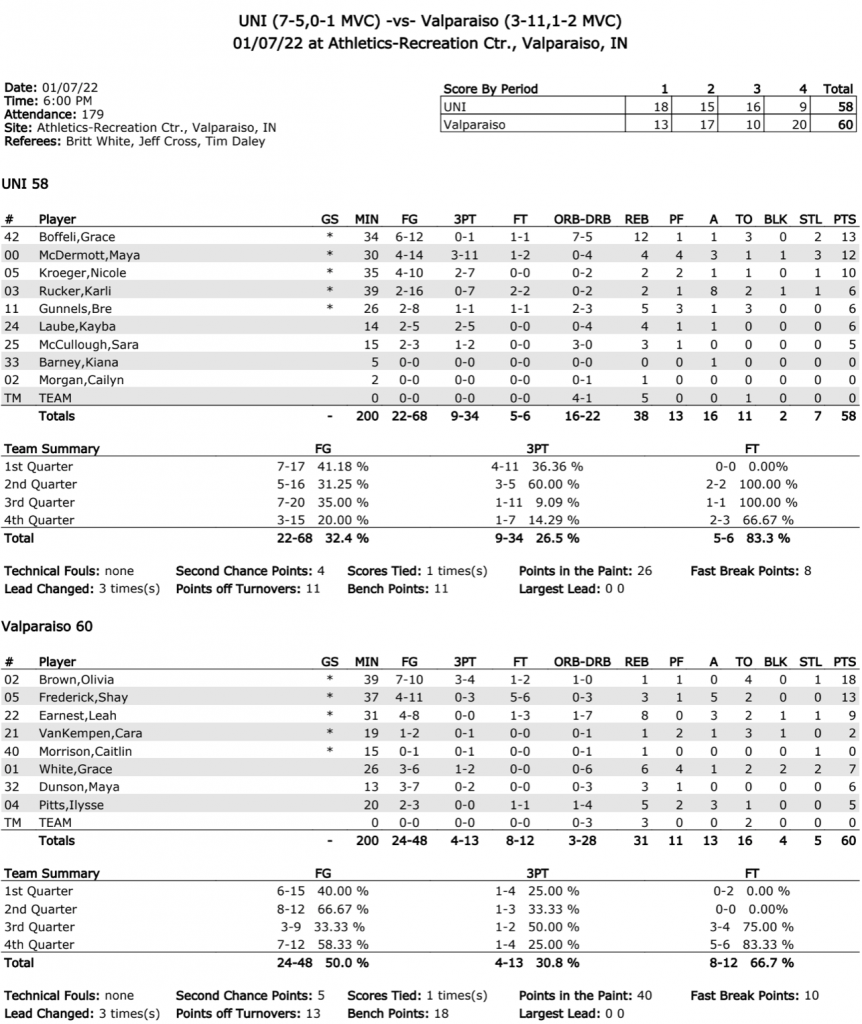