MASON CITY – A dog chased a squirrel up a tree today in East Park, and was tough to get down even for firefighters, eventually taking a tumble that will likely require a trip to the vet.

Early Thursday afternoon, William Printy of Rock Falls felt a little tug on the leash that was attached to his precious pet, a black lab named Keesha. He looked up to see her chasing a squirrel up a tree, on the east side of Kentucky Avenue near the frisbee golf hole and the train bridge.

“She was just up a little ways when I first saw her, but then she took off the rest of the way up the tree, to get that squirrel,” said Printy, a very upset and concerned pet owner.  The dog was several dozen feet in the air.

Animal control officer Pat Gansen responded, and said, “We can’t just leave her there, we have to figure something out.”

“There is always that option to leave it. Stray cats, we leave, because they have the equipment to go up and down trees, dogs don’t,” commented Gansen.  “I didn’t feel comfortable just leaving her to figure it out herself. She wanted to come down to be with him and she wanted the food. I have never found a dead cat in a tree, but we could have found a dead dog. This way she’s taken care of. We would have had to go to outside, private sources if we couldn’t have gotten anybody to help.”

The Mason City Fire Department assisted in the rescue, using their extended ladder to climb the tree and get a hold of of the dog by her leash. Trying to entice Keesha to come down slowly and encouraging her with food and her owner at the bottom, they gave a little tug.  She came down a little, but fell the rest of the way. She didn’t  yelp, but was hurt and limping.

He said he would be taking Keesha to Pioneer Animal Hospital to be checked out. 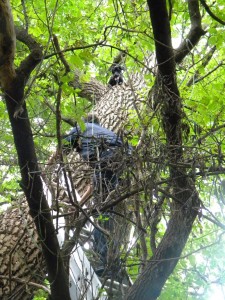 Climbing towards the rescue 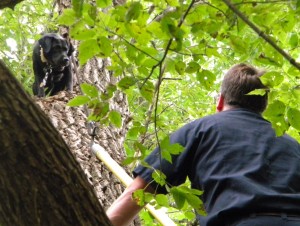 Got a hold of Keesha’s leash 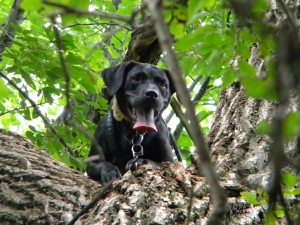 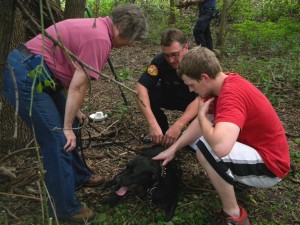 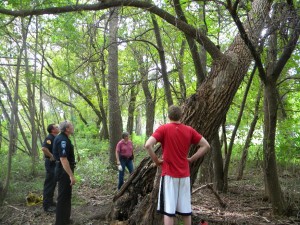 MCFD, MCPD and Animal Control trying to figure out a strategy 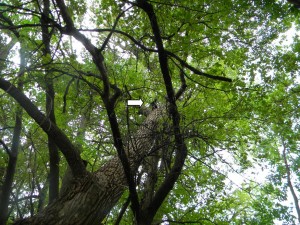 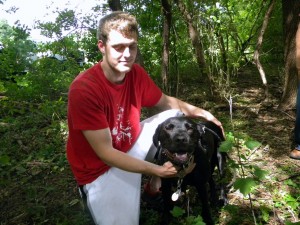