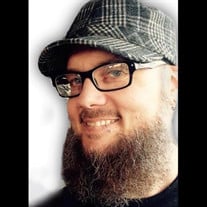 Per Michael’s wishes, his body has been cremated and a Celebration of Life will be held at a later date.

Michael was born August 17, 1976, the son of Anthony “Tony” and Dorothy “Mickey” (Moorehead) Allison in Cedar Rapids, IA. He married Dakotah Maben on September 29, 2017, at the Renaissance Festival in Shakopee, MN. A graduate of Newman Catholic High School in Mason City, class of 1994, Michael continued his education and graduated from Hamilton Business College in Mason City in 2001. He had worked at Curries since 2001.

Spending time with family was the most important thing to Michael. He loved his family unconditionally. Playing magic cards, video games and collecting Funko Pop figures were a few of Michael’s favorite pastimes.