Emily Ryan once again shined for Iowa State, setting a new career-high with 22 points while adding eight dimes and four boards to her stat line. The sophomore controlled the tempo for the ISU offense, while also competing all 40 minutes for the fourth time this season.

Ashley Joens tallied 17 points and 12 rebounds, for her 39th career double-double, as Beatriz Jordão set a new season high with 15 points, while pulling in six boards. Morgan Kane rounded out the Cyclones in double figures with 10 points, for her sixth double-figure scoring outing of the season.

It was the Sooners who started off hot, rattling off an 8-0 run before Ashley Joens got the Cyclones on the board knocking down a pair of freebies. From there, the Cyclones would string together a 10-2 run to even the score (10-10), capped by a 3-pointer by Maggie Espenmiller-McGraw with 5:37 to go in the first quarter. After a 7-0 OU run to give the Sooners a 17-10 lead, five different Cyclones would score to close out the quarter, trailing Oklahoma by just one, 21-20.

Ryan would give the Cyclones their first lead of the game, 23-21, with a triple off a pass from Kane just one minute into the second quarter. The Cyclones would put on the pressure defensively, holding OU, who ranks second nationally in points per game, to just 13 points in the quarter and take a 41-34 lead into the locker room. Oklahoma’s 34 points in the half marked the second-lowest scoring half for OU on the season. Ashley Joens paced the Cyclones with 12 points at the half, followed by nine points by Beatriz Jordão and seven points and five dimes from Ryan.

Out of the locker room it was all Ryan for the Cyclones. She notched 11 points off 5-of-6 shooting in the third quarter, including the first seven out of the gate for Iowa State. As a team, ISU went 11-of-20 from the field in the third and grew its lead to 14 to end the quarter, 66-52.

Oklahoma would make quick work in the fourth quarter, trimming ISU’s double-digit lead to just six with 7:44 to play after an 8-0 run to start the quarter. Following a timeout. Iowa State would regroup and halt the OU run, hanging on for the 81-71 win.

Iowa State returns to Hilton Coliseum to take on TCU on Saturday, Jan. 8. The game will be at 1 p.m. on Big 12 Now on ESPN+. 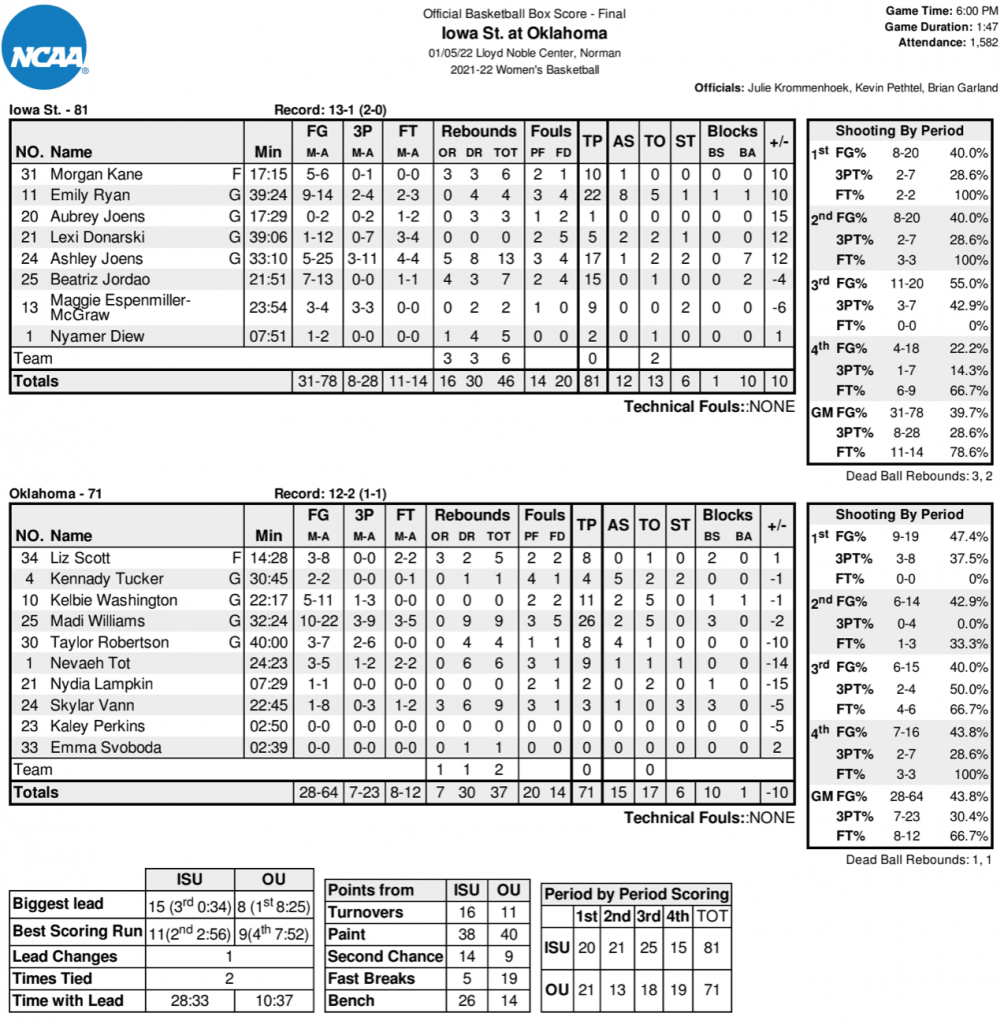