EVANSVILLE, IN – The UNI men’s basketball team played the Aces of Evansville on Sunday, January 3, falling to the MVC rival 70-64. The Panthers are now 2-7 on the season and 1-3 in the Missouri Valley Conference.

The Panthers struggled early in the second game in two days with the Aces. UNI trailed the Aces 35-25 at half. The Panthers were able to tie the game at 13-13 following a Noah Carter three pointer with 9:27 left in the first half and took a 20-18 lead with 6:54 remaining but the Aces were able to move ahead by 10 at the break.

The Aces maintained the lead throughout the second half, leading for over 33 minutes in the game. Trae Berhow and Evansville’s Evan Kuhlman made 4 back-to-back threes in the final minutes but the Panthers were unable to even the score. The Panthers got within 3 points with 3:21 remaining in the game before another flurry of points by the Aces sealed the 6-point victory.

Austin Phyfe led the Panthers with 19 points and 10 rebounds, 3 assists and 1 block while Trae Berhow added 11 points, 7 rebounds, and 1 steal. The Panthers scored 36 of the teams’ 64 points in the paint with 16 second chance points.

Bowen Born led the Panthers with 6 first half points going 2-5 from beyond the arc.
Austin Phyfe finished with a double-double with 19 points and 10 rebounds.
The Panthers shot 43.9% (25-57) from the field
UNI falls to 1-3 in MVC play.

Aces are now 3-1 in MVC play after sweeping the Panthers.
Shamar Givance finished with a team high 22 points going 6-9 from the field.
Evan Kuhlman added 14 points and 5 rebounds.
Aces led the game for 33:08.

The Panthers will get back to action on Jan 10-11 when they host the Bradley Braves in the McLeod Center. The Panthers and Braves will tip at 3 p.m. on Sunday January 10. Sunday’s contest will be broadcast on the Panther Sports Network. Monday’s game will tip a 7 p.m. with a MVC TV Network broadcast. 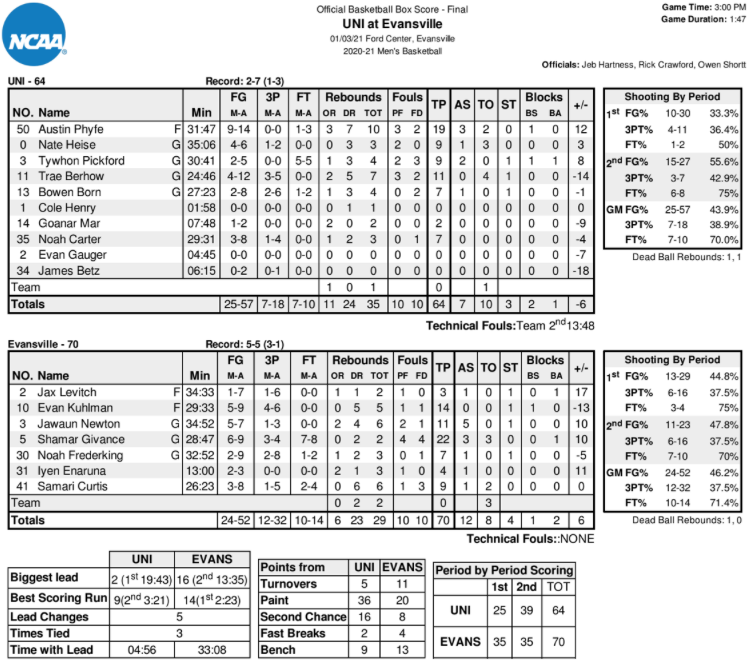