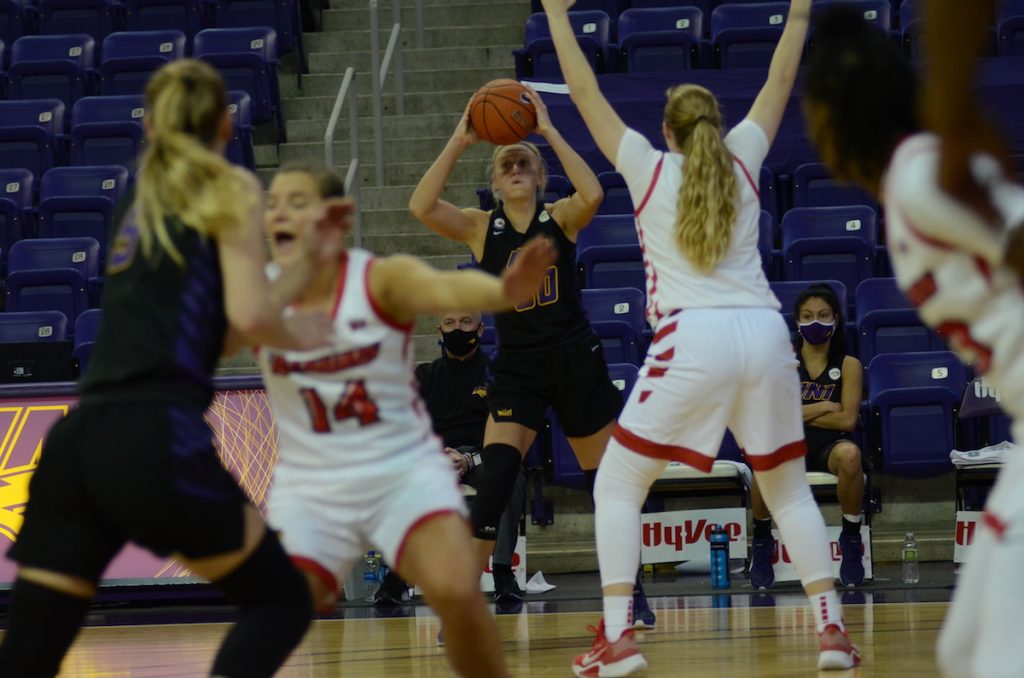 CEDAR FALLS – Bre Gunnels recorded her second double-double of the season with 15 points and 14 rebounds to lead UNI women’s basketball to a 72-67 comeback win and a series sweep over Illinois State to start Missouri Valley Conference play.

The Redbirds started hot, building a 10-0 lead in the first quarter before UNI answered with three-pointers from Cynthia Wolf, Kam Finley and Gunnels to cut the deficit to 14-9 at the end of the first quarter.

The Panthers built a 17-14 lead in the second before Illinois State responded to regain the lead a 29-27 lead at the break. Illinois State’s Juliunn Redmond scored nine of her 13 points in the third quarter and ISU extended their advantage to 43-30 with 3:48 to play in the quarter, before UNI battled back to cut the lead to 49-45 on a three-pointer from Emerson Green. A pair of free throws gave ISU a 51-45 lead heading into the final quarter.

Karli Rucker hit a jumper with 4:44 to play to put UNI up 60-58 and UNI wouldn’t trail the rest of the way en route to the five-point win.

Rucker scored a season-high and game-high 19 points to surpass Kerry Dawson for the No. 15 spot on the all-time scoring list with 1,143 points in her career. Cynthia Wolf joined Rucker and Gunnels in double figures with 11 points.

Megan Maahs pulled down one rebound which moved her into a tie for the No. 3 spot with Deb Drenth on the All-Time Rebound List with 758 career rebounds.

After earning the sweep, the Panthers are tied for the top spot in the MVC with Southern Illinois who picked up a pair of wins on the road against Evansville. Indiana State and Loyola and Drake and Bradley both split their weekend matchups. Missouri State and Valparaiso didn’t play this weekend due to COVID protocols.

With two conference wins under their belts, the Panthers travel to Valparaiso, Indiana on Jan. 7 and 8 to face the Crusaders. The Crusaders are 4-3 on the year with a pair of Big Ten wins so far this season.

– Bre Gunnels records 15 points and 10 rebounds for her second double-double of the season and fourth in her UNI career.
– Rucker ended the night with the game-high of 19 points, now No. 15 on the All-Time Scoring List with 1,143 points in her career.
– Maahs is tied for the No. 3 spot on the All-Time Rebounding List with 758 total career rebounds.
– The Panthers made nine three-pointers.