“The loss of Ms. Breonna Taylor’s life is a tragedy, and our office has worked tirelessly since receiving the case in mid-May to review all of the evidence in preparation for presenting it to an independent Grand Jury,” said Attorney General Cameron.  “The Grand Jury determined that there is no evidence to support a criminal violation of state law caused Ms. Taylor’s death.  The Grand Jury found that there was sufficient evidence to indict Detective Hankison for wanton endangerment for firing his weapon outside a sliding glass door and through a bedroom window, with some bullets traveling through that apartment and entering the apartment next door while three residents were at home.”

During the course of the independent investigation into Ms. Taylor’s death, SPU conducted interviews, sought the expertise of state and federal partners, including the KSP and FBI crime labs, and spent thousands of hours examining all of the available evidence.  SPU completed the last interview in the case on Friday, September 18, and began presenting the findings to a Jefferson County Grand Jury on Monday, September 21. 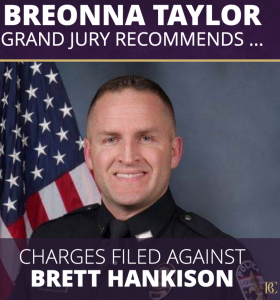 In the early morning hours of March 13, Sergeant Jonathan Mattingly, Detective Brett Hankison, and Detective Myles Cosgrove executed a search warrant at the home of Ms. Breonna Taylor.  The officers were advised by superiors to knock and announce their presence in serving this specific search warrant.

Evidence from SPU’s investigation shows that officers both knocked and announced their presence at the apartment.  The officer’s statements about their announcement are corroborated by an independent witness who was near in proximity to Ms. Taylor’s apartment.

When officers were unable to get anyone to answer or open the door to the apartment, the decision was made to breach the door. After breaching the door, Sergeant Mattingly was the first, and only officer, to enter the residence.  Sergeant Mattingly identified two individuals standing beside one another at the end of the hall, a male and female.  In his statement, he says that the male was holding a gun, arms extended, in a shooting stance.  Mattingly saw the man’s gun fire, heard a “boom,” and immediately knew he was shot as a result of feeling heat in his upper thigh.

Detective Hankison fired his weapon 10 times—including from outside a sliding glass door and through a bedroom window.  Some bullets traveled through apartment four and into apartment three, before some exited that apartment.  At the time, three residents of apartment three were at home, including a male, a pregnant female, and a child.

There is no conclusive evidence that any bullets fired from Detective Hankison’s weapon struck Ms. Taylor.

SPU looked at both reports to determine if there were major differences in the procedures used by each lab that would have led the FBI to identify who fired the fatal shot. Both law enforcement agencies used similar equipment and analysis, but issued different findings.

The investigation found that Sergeant Mattingly and Detective Cosgrove were justified in their use of force, after having been fired upon by Kenneth Walker.  Secondary to this justification, the KSP and FBI ballistics analysis reached different conclusions, creating a reasonable doubt in the evidence about who fired the fatal shot.

Also at today’s announcement, Attorney General Cameron announced he will be creating a task force to review the process for securing, reviewing, and executing search warrants in Kentucky. The task force will include elected leaders, citizens, law enforcement representatives, members of the judiciary, defense attorneys, and others.

“Conducting a top to bottom review of the search warrant process is necessary to allow input on the current system and determine if changes are required,” said Attorney General Cameron.  “This is a necessary step for our law enforcement, citizens, and elected leaders to take together, and I look forward to leading this important discussion.”

Ben Crump, attorney for the family of Breonna Taylor, released a statement, saying, “The indictment was insulting & offensive to Breonna Taylor’s life, legacy, & family. The grand jury proceedings were a SHAM. The “wanton endangerment” charge is an example of America’s 2 justice systems – protecting white neighbors & ignoring the death of a Black woman. How ironic and typical that the only charges brought in Breonna Taylor’s case were for shots fired into the apartment of a white neighbor, while no charges were brought for the shots fired at Bre or into her Black neighbor’s apartment.”

Earlier, it was announced Breonna Taylor’s family will receive a $12 million settlement from the city of Louisville connected to this incident.