CEDAR FALLS – The Ninth-ranked UNI Panther football team took care of business Saturday and cruised to a 38-7 win over Western Illinois in the regular-season finale in the UNI-Dome.

The UNI defense held Western Illinois to just 240 yards and forced two turnovers, including an interception returned for a touchdown in the lopsided win.

The Panthers opened the scoring with a one-yard touchdown from senior Trevor Allen with 5:41 left in the first quarter. The score capped a 15-play, 61-yard drive for UNI.

Western Illinois tied the game up at 7-7 with a four-yard touchdown pass with 1:47 left in the first quarter. It would be the final points for the Leathernecks.

The Panthers regained the lead on a 25-yard Matthew Cook field goal with 11:41 to play in the second quarter. Freshman Logan Wolf scored his first career touchdown on a 61-yard bomb from Will McElvain with 4:15 to play in the second quarter to give UNI a 17-7 lead at the half.
The Panthers went three and out on their opening drive of the second half, but the UNI defense came up big when Kolarevic picked off WIU QB Connor Sampson and returned it 28 yards for the TD to put UNI up 24-7 with 12:45 to play.

UNI picked up a touchdown from Jaylin James on a 36-yard reception and Allen’s second of the game to close out the 31-point win.
Allen rushed for 94 yards and two TDs on 24 carries. McElvain added 49 yards on 10 carries and Sam Schnee added 48 yards on 12 carries.

Wolf led all receivers with 82 yards and a TD on three receptions. James caught just one pass on the day, but it was the 36-yard touchdown. McElvain was 10-18 for 154 yards and two touchdown passes. He did not throw an interception on the day.

The win moves UNI to 8-4 and 6-2 in MVFC play. The Panthers close the season in sole possession of second place.

Logan Wolf’s 61-yard touchdown is the first of his career, along with a career-high 82 receiving yards.

Christian Jegen’s forced fumble recovered by Omar Brown set UNI up for their first touchdown of the game.

Chris Kolarevic picks off Connor Sampson and returned it 28-yards for a touchdown. It was the first pick-six of Kolarevic’s career.

The Leathernecks attempted a fake punt, but came up short and turned the ball over on downs on their own 36-yard line. McElvain found James in the end zone on the first play of the ensuing drive to put UNI up 31-7.

UNI went undefeated at the dome for the first time since 2011.

The Panthers await their playoff fate and will learn it at 11:30 a.m. central when the field is announced live on the FCS selection show on ESPNU. The Panthers are a virtual lock for the post-season field and may be in line for a seed and a bye after a wild day in the FCS. Three teams in the top-10 of the FCS STATS Top-25 lost Saturday, including losses by South Dakota State and Illinois State to unseeded teams. 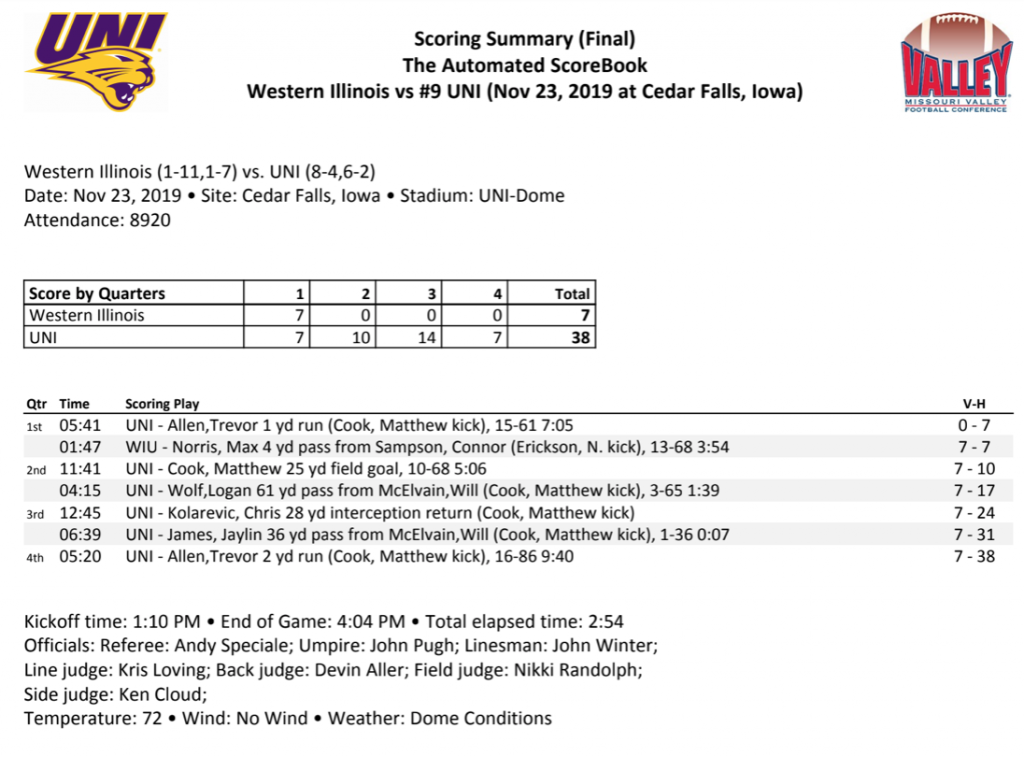