WALLINGFORD, IOWA – A man wanted in Floyd county is accused of dealing marijuana in North Iowa and faces felony charges.

The Emmet County Sheriff’s Office says two men were arrested November 1st as the result of a traffic stop early Thursday morning. Sheriff Mike Martens says that shortly after midnight, a sheriff’s deputy on patrol near Wallingford conducted a traffic stop on a vehicle after observing one of the occupants littering along the highway. Upon initiating the traffic stop in the 1900 block of Highway 4 and making contact with the occupants of the vehicle, it was determined that two of the three occupants were wanted in regard to outstanding arrest warrants.

As a result, 20-year-old Joshua Hoferman of Jackson, Minnesota and 19-year-old Ian Kramer Estherville were placed under arrest. Hoferman was wanted by Palo Alto County authorities in regard to an outstanding arrest warrant for violation of probation, while

Kramer was wanted on three separate arrest warrants from Dickinson County, Floyd County and Emmet County for failure to appear. Additional investigation by the sheriff’s office at the scene discovered 121.69 grams of a substance believed to be marijuana, a scale and drug paraphernalia.

As a result of this discovery, Kramer was also charged with possession of a controlled substance with intent to deliver a class (D) felony, failure to affix a tax stamp a class (D) felony and possession of drug paraphernalia (a simple misdemeanor). Kramer was transported to the Emmet County Jail where he was booked on the charges and Hoferman was transferred to Palo Alto County authorities. 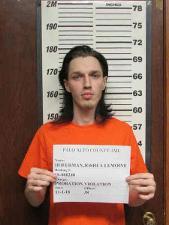 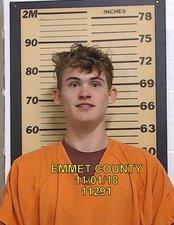