MASON CITY – A convicted crack cocaine dealer who was sent to an Iowa prison and released this past fall was arrested after an alleged violent incident in Mason City this weekend.

Mason City police responded to a physical domestic assault Saturday morning, February 24 at about 6:14 AM. Officers arrived at 122 1/2 13th Street NE (owned by Steven and Tracie Vandenberg) and after an investigation, 27-year-old Reggie Isiah Williams of Mason City was arrested on charges of felony domestic abuse assault involving strangulation and obstruction of emergency communications. He was taken to the county jail, where he remains held at this time.

Williams was nabbed by police in March of 2013 along with a long list of other alleged drug offenders in a roundup. Later that summer he was given a suspended 10-year prison sentence and probation. However, after violating his probation for a second time in this case, he was finally sent to prison in November of 2015. He was incarcerated until October of 2017 when he was paroled. He apparently came right back to Mason City and at this time, records show his wages are being garnished to pay off $3,098.22 in fines and court fees. 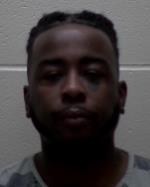