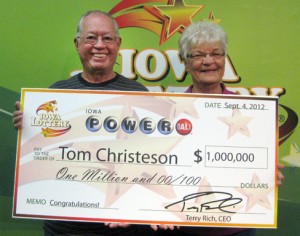 Tom Christeson Bought Winning Ticket While Out To Eat With Family In Urbandale.

DES MOINES, Iowa – A Webster City man visiting family in the Des Moines area over the Labor Day weekend just happened to buy a Powerball ticket while out to dinner – and won a $1 million prize.

“I just bought it,” Tom Christeson said as he claimed his big prize Tuesday at lottery headquarters in Des Moines. But did he ever really think he’d win big? “Never!” he said with a laugh.

Christeson, 70, and his wife, Norma, had decided to spend the weekend visiting their daughters and their families, but planned to head back home on Sunday. Their visit got extended after they realized their good fortune.

Christeson said he checked his winning ticket while his daughters were shopping on Sunday, and although he was fairly calm about the big news, he was worried about Norma.

“I thought my wife maybe was going to fall into a pile, but other than that, everything was fine,” he said, smiling as he remembered.

Christeson, who drives a grain truck at Heartland Co-op in Randall, said he already had been planning to retire in January, and he will stick with those plans, as the co-op’s busy season is approaching with the fall corn harvest.

Christeson has more room in mind for his winnings: with four children and nine grandchildren, he said an expansion of their family home is in order.

“We’ll be building onto the house, improving the house to add a room,” he said. “That’s all I know for sure.”

Norma Christeson, his wife of nearly 47 years, wiped away tears as Christeson was presented with the check for his prize winnings.

Lottery players in Iowa now have won seven Powerball prizes of $1 million or more in 2012, including the $241 million jackpot in the June 13 drawing.

Christeson bought his winning ticket at Hy-Vee, 8701 Douglas Ave. in Urbandale, and came close to winning it all in Saturday’s $80 million jackpot drawing, matching the first five numbers but missing the Powerball. Saturday’s winning numbers were: 8-11-21-44-49 and Powerball 22.

“It is so exciting to see all these big prizes being won in our state,” Lottery CEO Terry Rich said. “Call it a run of luck, the stars aligning, a winning streak – whatever the name, we like it.”

When $2 Powerball began in January, lottery officials predicted that the newly designed game would produce more millionaires. The new version of the game debuted Jan. 15, sporting several new features to give players more value. The game’s starting jackpots have doubled to $40 million and the jackpot is now easier to win. But perhaps the most important change for Christeson is that the game’s second prize for matching the first five numbers but missing the Powerball has increased from $200,000 to the current $1 million cash.

Players in Adair, Council Bluffs, Des Moines and Ottumwa already had claimed $1 million Powerball prizes this year, while a group of co-workers from the Quaker Oats plant in Cedar Rapids calling themselves The Shipping 20 claimed that $241 million jackpot in June.

No one won the jackpot in Saturday’s drawing, so Powerball’s top prize climbs to an estimated $90 million for Wednesday.

Players in $2 Powerball still choose their first five numbers from a pool of 59, but the group of numbers in the Powerball pool has shrunk from 39 to 35, producing better overall odds of winning a prize. The Power Play® option is still available for an extra $1 per play.