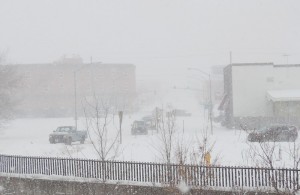 North Iowa roadways saw a handful of accidents during the closing weekend of 2017 due to snowy and icy road conditions. The counties of Cerro Gordo, Worth, and Floyd reported a series of multi-vehicle crashes that resulted in minor injuries and trips to the hospital. Such accidents have become expected in this part of the state at this time of year, but cautious driving habits can greatly reduce your chances of being involved in such an accident yourself. To stay safe on the roads for the rest of this winter, be sure to heed the following tips:

Cold weather is known to cause tires to lose pressure, so it’s best to check your tire levels before hitting the road, especially after a sharp drop in seasonal temperatures. Underinflated tires can negatively impact traction and thereby cause a worsening of sliding and other handling difficulties. Last year, ConsolidateTimes.com pointed out that Iowa has been one of only a few states that haven’t experienced record high annual temperatures. Thus, the sustained chilly weather means that tires are more likely to be underinflated in North Iowa than in most other parts of the country.

Using cruise control on an icy road can be a recipe for disaster because this mode of driving causes your vehicle to continue accelerating at a set speed. Of course, if you start sliding on ice or water then you don’t want the engine to keep accelerating, as it could send you spinning out of control and off the road. In general, once the temps drop below freezing, it’s best to refrain from using cruise control, even if you don’t see any ice on the roads, as you could run into a rough patch unexpectedly.

3. Gentle on the Brakes and the Gas

This is perhaps the most important rule of thumb to follow, as sliding is usually caused by excessive acceleration or sudden braking. If you do start sliding, don’t slam on the brakes. Instead, steer towards the direction of the slide and apply neither brakes nor gas until the vehicle regains traction. Studying how to correct a slide is something that every North Iowan motorist should do in preparation for winter driving.

Although this might seem like a snail’s pace when you’re on the highway and the speed limit is 60 or 70 MPH, when driving conditions are treacherous it’s better to be safe and slow than sorry and injured, or worse. Studies have proven that traveling faster than 50 MPH greatly increases the chances of sliding or hydroplaning during harsh weather conditions.

Other Things to Be Aware of

On extremely cold days, it’s important to ensure your vehicle has enough antifreeze and gas to prevent the engine block and gas lines from freezing. If your vehicle gets stuck in the snow, don’t leave it running and don’t over exert yourself trying to push it out of the snow.