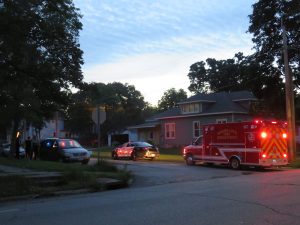 Police and ambulance on the scene

MASON CITY – A Mason City man has been caught with meth, marijuana and a long knife and has twice committed domestic abuse, landing him in the Beje Clark halfway house.

A Cerro Gordo county deputy allegedly witnessed a domestic assault in progress Sunday night, August 29 at around 7:42 PM near the area of North Penn Avenue and 7th Street NE. The deputy apparently intervened, and Mason City police and an ambulance were called to the scene to assist. The female did not appear to be transported in the ambulance and may have been treated at the scene. As a result of the incident, James Michael Hauser, age 33, was arrested and charged with serious domestic assault.

In September, Hauser pled guilty to first-offense domestic abuse assault in connection to this incident. He was sentenced to 2 years of probation, a one year suspended prison term, and ordered to pay $661.75 in fines and court fees. Hauser must reside in the Beje Clark halfway house for 180 days.

Hauser was not done with the violence, however. Mason City police responded to a domestic incident that took place on September 5, involving Hauser. In October, he again pled guilty to first-offense domestic abuse assault. He was sentenced in 30 days in jail with 10 days suspended. He must also pay $196.50 in fines and fees. Records show he has made no payments on these two balances owed to the state.

Hauser was charged by the Cerro Gordo county sheriff’s office in May with first-offense possession of methamphetamine. Instead, he entered a guilty plea in July to possession of marijuana and was ordered to pay $887.35 in fines and court fees.

In September, Mason City police caught Hauser with marijuana. He entered a guilty plea in that case to second-offense illegal possession of a controlled substance.He was given a suspended fine and a suspended prison sentence as well as a two year probation term. He was ordered to pay $235.00 in court fees.

Previously, in January, Hauser was caught by law enforcement with a knife over 5 inches long in Wright county. He was later guilty and sent to jail for 6 days and ordered to pay $1,370.30 in fines and court fees.

Records show that so far, Hauser has made no payments on only of these debts owed to Iowa courts. 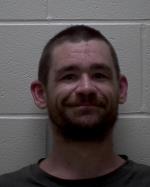