Minnesota man admits to the murder of Jacob Wetterling

This news story was published on September 7, 2016.
Advertise on NIT • Subscribe to NIT 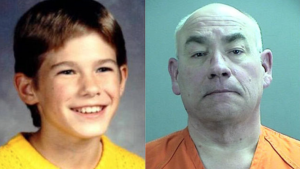 “Danny Heinrich is no longer a person of interest,” said U.S. Attorney Luger. “He is the confessed murderer of Jacob Wetterling and nearly 27 years after he committed this heinous crime, he has been brought to justice. And Jacob is finally home.”

“This outcome is proof of what we can accomplish when law enforcement and prosecutors work together at the federal, state and local level,” said Special Agent in Charge Thornton. “When the FBI proposed a cold case review with the assistance of an expert from the FBI’s Child Abduction Rapid Deployment team two years ago, our partners agreed to this and embraced the opportunity to have a new set of eyes help take a fresh look at the voluminous and complex case file. I am extraordinarily proud of the FBI and of all the law enforcement personnel, past and present who poured their hearts and souls into this investigation, seeking justice for Jacob and answers for everyone.”

“Jacob Wetterling’s abduction in 1989 ended an age of innocence for Central Minnesota and beyond and had a dramatic impact on how parents raised their children,” said Sterns County Sheriff Sanner. “As the investigation wore on and years turned to decades the hope of resolving the case and bringing Jacob home never once faltered. A combination of steadfast determination, science and a unique collaborative effort involving local, state and federal agencies highlighted the value and importance of these relationships. Even though the ending is not what we had hoped and prayed for, Jacob is finally home.”

“From the night he went missing, the BCA never gave up on finding Jacob,” said Superintendent Evans. “For 27 years, BCA agents and our many partner agencies from all over the country doggedly followed every lead and pursued every tip. The BCA team of agents, scientists, and crime scene examiners have been collecting and analyzing evidence throughout the investigation. Last fall, our scientists connected Heinrich through DNA to another assault, which led to his arrest on the charges he faces today and eventually, led our agents and crime scene team to Jacob. While this is not the result we hoped for, Jacob can now finally come home.”

“This event in the history of Minnesota, especially the history of Stearns County, could not have been accomplished without every member of this local, state and national team,” said Stearns County Attorney Kendall. “Despite the complication of this path, this case demonstrates that no case is too hard to solve, no tip too insignificant to consider and no legal obstacle insurmountable in finding answers and accountability for Jacob Wetterling and for everyone near and far who knows his name. We never stopped looking for Jacob; none of us will ever forget the moment we found him. Our condolences and deepest sympathies remain with the Wetterling family.”

According to Heinrich’s guilty plea, on Oct. 22, 1989, he abducted, sexually assaulted and murdered Wetterling.

According to Heinrich’s guilty plea, on Jan. 13, 1989, he abducted and sexually assaulted a 12-year-old boy.

According to Heinrich’s guilty plea, he possessed between 10 and 150 child pornography images, including images of prepubescent minors under the age of 12. The pornographic material portrays sadistic or masochistic conduct and images of morphed child pornography.

The parties have jointly recommended a federal prison sentence of 20 years.

This case is the result of an investigation conducted by the FBI, Minnesota Bureau of Criminal Apprehension and the Stearns County Sheriff’s Office.