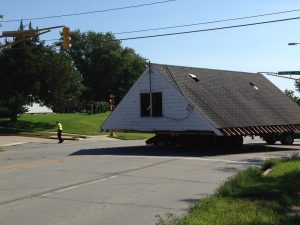 MASON CTY – Another house was moved in Mason City, this time to help clear the way for a road improvement project.

The house that moved was formerly located at 507 5th Street SE. The Iowa DOT had purchased some properties at this location, NIT is told, to make room for changes that are coming to this “s curve” area, just before Carolina Avenue. This particular house ended up in the possession of local landlord Russ Hardy. Mason City police assisted in securing a route from its old location to a new location. A police spokesman told NIT that at about 10:00 AM Monday morning, that Spencer House Movers of Blue Earth, Minnesota, “moved the house and roof section as two units. The route went east on Hwy 122, south on Carolina, east on 8th Street SE, and then south on Virginia Avenue” before making it to its new home at 694 13th Street SE. 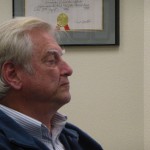 The DOT had purchased some properties near the S curve on Hwy 122 East to change the layout. Apparently the DOT took bids to demolish certain houses there. One of the winning bidders for the 507 5th ST SE house apparently sold the house to Russ Hardy instead of demolishing it, NIT was told. Today around 10 am, MCPD was involved briefly with traffic control on Hwy 122.

“This (house move) went pretty smoothly this morning,” the MCPD said via social media. “Hope it goes back together as well as it came apart.”

Over on 13th SE, the bottom-half of the house sat in the grass on top of supports, next to a new foundation.  The roof portion of the house was sitting about a block away.

Mr. Hardy has moved a number of other homes in the past, most recently a house moved from Connecticut Avenue to make room for new senior condos, to a new location on 7th Street SE.  He also moved flood-buyout homes from the East Park area to South Jackson Avenue.