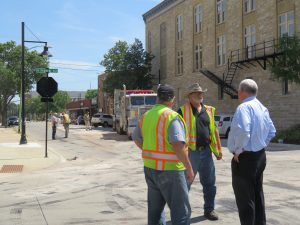 MASON CITY – A semi sprung a leak in downtown Mason City Tuesday afternoon, causing road closures after oil spilled all over the streets.

A Conway semi was making a delivery in downtown Mason City when it began to have mechanical issues. The air conditioning shut off and the brakes had issues. Finally, near the intersection of First Street North and Federal Avenue, the truck sprung a leak in the oil pan, NIT is told, leading to about 8 gallons of motor oil spilling onto the street.

City workers, including City Administrator Brent Trout, converged on the scene, shutting down most access to the intersection. Sand was thrown on much of the spill, but some cars had already driving through the oil, tracking it in all directions. Mr. Trout could be heard discussing with city workers the cost to clean up the mess.