MASON CITY – A Mason City man is in jail for failing to appear in court.

Tyler Lee Donahoo, 18, was arrested on May 23rd by Mason City police at 111 West State Street. A warrant for his arrest had been issued the previous day after he failed to appear in court on charges of felony D third degree burglary and felony D conspiracy. The charges stem from a December 3rd, 2012 incident where Donahoo and a group of young men, some of them minors, allegedly conspired to steal a Yamaha dirt bike at Hawkeye Storage in Mason City.

Donahoo is now in the Cerro Gordo County Jail on $5,000 cash-only bond, awaiting a court date that has not yet been set.

Donahoo has another major legal entanglement he is dealing with, as well.

According to Cerro Gordo County Sheriffs, Donahoo was stopped for a traffic violation on April 27, 2013 at 2:32 AM  at 8th and North Jefferson, Mason City and charged with Operating While Intoxicated (1st offense), possession of marijuana, and unlawful consumption.  He was released on his own recognizance a few hours later.

Donahoo is facing a June 3rd court date on those charges. 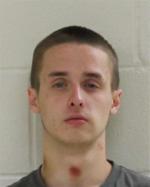 6 Responses to Mason City man in jail for skipping court