This news story was published on November 4, 2015.
Advertise on NIT • Subscribe to NIT 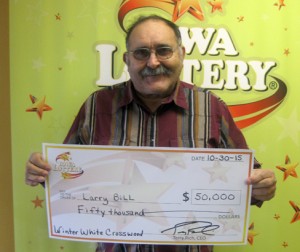 Bill said that he stopped for ice cream and a soda that day and decided to buy a scratch ticket as well.

“I hadn’t bought a (lottery) ticket for probably five months and I thought, ‘Well, it’s time to buy some more so I bought one,’” Bill told lottery employees Friday as he claimed his prize at the lottery’s regional office in Mason City.

The 69-year-old retiree said he scratched off his ticket and thought he’d won $5,000 because he only counted nine complete words on his ticket, but a return trip to Andy’s Mini Mart confirmed that he’d missed the 10th word and with it the game’s $50,000 top prize.
“When I got back from Andy’s I think everybody in town knew (I’d won),” Bill said.