GARNER – A Garner woman’s felony fraud trial has been postponed for a fourth time.

Banse was originally set to face a jury trial on June 4, 2014. However, the honorable judge James Drew has granted two continuances, and judge Colleen Weiland has now granted two, as well. Banse’s jury trial is now scheduled for December 3 in Hancock county district court. A pre-trial conference is set for November 18.

Banse is a Garner-Hayfield Community School District employee, employed as a student advocate/at risk coordinator. She is accused of filing false reports in order to collect Medicaid payments totaling over $10,000. She has been placed on paid leave from her job at an elementary school. 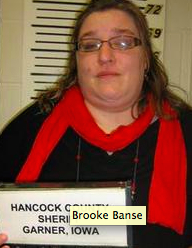