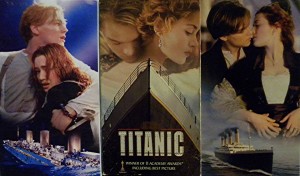 Titantic 3-D (PG-13) starts today (Wednesday April 4) at the Cinema West Theater to commemorate the centenary of the Titanic setting sail on April 10, 1912.

One hundred years ago, the maiden voyage of the “unsinkable” R.M.S. Titanic was underway. The passenger liner sank on April 15, 1912 when it collided with an iceberg in the frigid North Atlantic Ocean. The Titanic had 2,224 people aboard and the sinking caused the deaths of 1,514. It is considered one of the deadliest peacetime maritime disasters in history.

One of three Olympic class ocean liners operated by the White Star Line, she was built between 1909 and 1911 by the Harland and Wolff shipyard in Belfast. Her passengers included some of the wealthiest people in the world, as well as over a thousand emigrants from Britain, Ireland, Scandinavia and elsewhere seeking a new life in America.
Although the Titanic had advanced safety features such as watertight compartments and remotely activated watertight doors, she lacked enough lifeboats to accommodate all of those aboard. Because of outdated maritime safety regulations, she carried only enough lifeboats for 1,178 people, a third of her total passenger and crew capacity.

Titanic 3D is the remake of the 1997 American epic romance and disaster film directed, written, co-produced, and co-edited by James Cameron. A fictionalized account of the sinking of the RMS Titanic, it stars Leonardo DiCaprio as Jack Dawson, Kate Winslet as Rose DeWitt Bukater, Gloria Stuart as Old Rose, and Billy Zane as Rose’s fiance, Cal Hockley. Jack and Rose are members of different social classes who fall in love aboard the ship during its ill-fated maiden voyage.

Upon its release on December 19, 1997, the film achieved critical and commercial success. It equaled records with fourteen Academy Award nominations and eleven wins, receiving the prizes for Best Picture and Best Director. With a worldwide gross of over $1.8 billion, it was the first film to reach the billion dollar mark, remaining the highest-grossing film of all time for twelve years, until Cameron’s next directorial effort, Avatar, surpassed it in 2010.

Titanic is also ranked as the sixth best epic film of all time in AFI’s 10 Top 10 by the American Film Institute.

(Information about the RMS Titanic From Wikipedia, the free encyclopedia.)