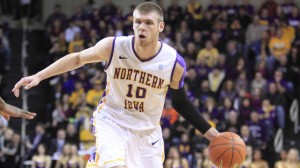 Tuttle averaged 15.4 points and 8.0 rebounds a game as a junior. Tuttle was a first-team all-MVC selection last season. He enters his senior season with 1,213 points, which ranks him No. 17 on UNI’s all-time scoring chart.

UNI will open its exhibition season Thurs., Oct. 30, against Upper Iowa at 7 p.m. in the McLeod Center.