Man gets death sentence after murdering woman and her daughter 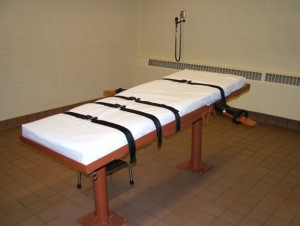 “This is a heartbreaking case,” said Assistant Attorney General Caldwell. “A young girl witnessed the murder of her mother, was held captive for days, and had her life cut tragically short by a senseless, brutal murder. We hope today’s verdict will help Lexis’s family as they continue to struggle with the loss of their loved ones.”

“These types of cases are never easy, but today we remember the victims, their families and their loved ones,” said U.S. Attorney Finley. “The nature of the crime and the level of violence involved are something that we never get used to no matter how long we have done this. The severity of the sentence imposed against Sanders underscores the senseless brutality of his acts against an innocent 12-year-old girl. Lexis Roberts was needlessly taken from a family that loved her, and she was denied the most fundamental right of life, and they were denied the joy of knowing what that life could have been. Still, we do not lose sight of the fact that this trial and sentencing also represent the right of due process that was extended to Sanders, and a jury of his peers has rendered justice. Nothing, no trial or sentence, can ever bring Lexis or her mother back, but we hope that the verdict brings some measure of closure to Lexis’s family. The prosecutors and the law enforcement agencies that assisted in this case are to be commended for their hard work. The importance of their collective efforts cannot be overstated.”

“Our thoughts and prayers go out to the family and friends of the victims who have endured unimaginable grief while awaiting the just verdict and sentence for such horrific crimes,” said FBI Special Agent in Charge Anderson.

Evidence admitted during trial established that Sanders met Suellen Roberts, 31, in the summer of 2010 when Roberts rented a storage unit at a warehouse in Las Vegas where Sanders worked. Roberts and Sanders began dating, and approximately two months later Roberts agreed that she and her 12-year-old daughter, Lexis, would go on a trip with Sanders over the Labor Day weekend to a wildlife park near the Grand Canyon. As they were returning to Nevada after three days of traveling, Sanders pulled off Interstate 40 in a remote location in the Arizona desert and shot Suellen Roberts in the head and forced Lexis Roberts into the car, keeping her captive.

Sanders drove several days across the country before he murdered Lexis Roberts in a wooded area in Catahoula Parish, Louisiana. Evidence at trial established that Sanders shot Lexis Roberts four times, cut her throat and left her body in the woods, where a hunter found her body on Oct. 8, 2010. A nationwide manhunt ensued, and Sanders was arrested on Nov. 14, 2010, at a truck stop in Gulfport, Mississippi, by FBI agents and a Harrison County Sheriff’s Deputy.

At trial, the jury heard a recorded confession in which Sanders admitted killing the mother and daughter.