MASON CITY – A Mason City woman is facing the loss of a deferred judgement in a felony drug delivery case after pleading guilty Monday to second offense drunk driving.

Jennifer Lynn Galkin, age 21, drove her vehicle into a ditch near the Cinema West Theaters – where Glakin claims to be employed – early on the morning of April 21, 2014. She was then charged with second offense operating while intoxicated. Galkin plead guilty Monday and immediately reported to the Cerro Gordo County Jail to serve a 10 day jail sentence. She was also ordered to pay $2,656.75 in fines and fees and placed on probation for two years.

Galkin pled guilty to first offense operating while intoxicated in 2012.

Meanwhile, Cerro Gordo prosecutors have initiated probation revocation proceedings against Galkin. She was given a deferred judgement and placed on probation for 3 years for delivering marijuana in 2012. She was also ordered to pay $832.60 in fines and court fees, but has only paid $400 so far.

Galkin could face all or part of the original penalty involved with a class D felony for the drug delivery crime if her deferred judgement is revoked. She awaits an October 17 hearing. 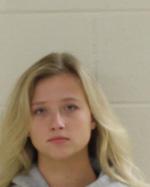