Jack Hatch says no one should count him out 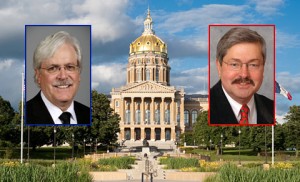 DES MOINES – The race for Governor in Iowa has seemed like a foregone conclusion, with incumbent Terry Branstad comfortably ahead in polls, but Democratic challenger Jack Hatch says the race is just getting started.

“Tonight’s Iowa Poll numbers are an encouraging sign at this point in the campaign,” Hatch said, referring to poll numbers released by the Des Moines Register that put Branstad ahead 48% to 34% with 10% undecided and some going to other candidates.

“Challenging an incumbent Governor who has been fundraising for four non-stop years is no easy task – let alone one who has run a relentless negative television ad campaign aimed to mislead voters.”

Branstad has millions more in the bank than Hatch, who has had to pull TV ads in Sioux City and Davenport, while Branstad has ramped up the ad campaign.  Hatch has failed, so far, to rally voters to his cause after two televised debates, but claims his campaign is on the right track.

“Our campaign is making real progress,” Hatch claimed has he rolled through Eastern Iowa Monday. “More and more Iowans across the state are tuning in as Election Day draws near and realizing they’re tired of the Governor’s scandals, mismanagement and terrible decision-making.

“We’re encouraged by the two latest polls in this race and the trend they’re starting to show. There are still 35 days left in this campaign, and that’s a long way to go. Come Election Day, we’re confident Iowans will conclude they want a fresh start and a better deal.”

Hatch, although behind, pointed to a former Democratic candidate for Governor who was behind but came back to win.

“As former Gov. Tom Vilsack showed 16 years ago – when a September Iowa Poll had him down by some 22 percent to presumptive winner Jim Ross Lightfoot – Iowans love an underdog and a fighter. At this point in the race, no one should count out Jack Hatch.”