MASON CITY – A judge sent a Mason City man to jail for 90 days Monday afternoon for violating his probation.

James Lee Stricker, age 41, was sentenced to 90 days in jail by Judge Annette Boehlje after she found him guilty of violating the terms of his probation in connection to his guilty plea to third or subsequent offense public intoxication. He will be in the Cerro Gordo County Jail until December 23.

A year ago at this time, Stricker was in jail, serving a 30 day sentence. According to police, Stricker was arrested on March 31, 2013 for harassment and interference. During the arrest, he resisted by attempting not to be handcuffed, punched an officer in the face, kicked at officers, and spat on one of the officer’s faces. 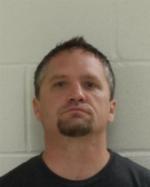