This news story was published on September 28, 2014.
Advertise on NIT • Subscribe to NIT 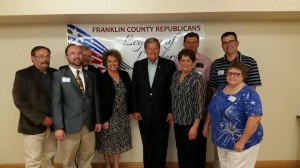 SHEFFIELD – Saturday evening, the Franklin County Republican Party along with 50 guests, recognized and honored retiring 3rd District Iowa Congressman Tom Latham for his 20 years of service to Iowans in the U.S. House of Representatives. Latham, a Franklin County native, was on hand to greet well wishers and speak to the crowd at Sheffield’s Ridge Stone Golf and Country Club.

“What I’ve always tried to do is to bring Iowa values—Franklin County’s values—to Washington,” Latham said in his message to the audience. “I will be stepping away from Congress at a time that’s right for me. I still get a shiver up my spine when I walk across the street and see the dome of the U.S. Capitol,” Latham continued. “If you’ve been there long enough not to have that feeling, then you should have been gone a long time ago.”

John Latham, a nephew of Congressman Latham, and President of Latham Hi-Tech Seeds announced that with the funds raised for the Legacy of Leadership Event, the Franklin County Republican Central Committee had agreed to donate $1,000 to the formation of a new scholarship for Franklin County students. The Latham “Legacy of Leadership” Scholarship committee will be formed soon with other details forthcoming.

Iowa House Majority Leader, Linda Upmeyer, and Republican candidate for Iowa Senate, Shawn Dietz presented Congressman Latham with a handmade “memory box” as a gift from the Franklin County Republican Central Committee. Dietz announced that “Only good memories were to be stored in the box, and the wood from the box and Congressman Latham have one thing in common – both were native to Franklin County.”

Upmeyer also read letters of congratulations and recognition to Congressman Latham from former U.S. House Speaker and 2012 Republican Presidential candidate, Newt Gingrich, as well as current Speaker of the House, John Boehner, in which Boehner noted Latham’s desire to bring Iowa values to Washington, “in the pursuit of individual liberty, and fiscal conservatism.”

The Franklin County Republican Central Committee intends to host the “Legacy of Leadership” dinner annually in honor of Congressman Tom Latham’s 20 years of service to the citizens of Iowa in the United States Congress.